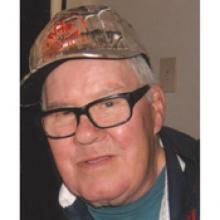 STANLEY (STAN) GORDON HUTCHINS It is with deep sorrow we announce the passing of our beloved father Stanley Gordon Hutchins on Wednesday, November 12, 2014 at the age of 76. Stan is survived by two sons: Darrell (Charlene) and their son David of Winnipeg and Shane (Melissa) and their children Isabelle, Clementine and Oscar of Churchill; daughter Raylene (Kerwyn) Welbourne and their children Holly, Jackson and Samuel of Winnipeg; four sisters: Aileen Webster, Audrey Johnson, Sharon (Wayne) McInnes, Faye (Ken) Pearson and their families; two brothers: Gerald (Shirley) and Garry (Bev) Hutchins and their families. Dad was predeceased by his wife Ina; parents Raymond and Muriel (Goodburn) Hutchins; brothers Wallace, Francis and Earl; sister Flo; nephew Barry Hutchins; brothers-in-law Brian Johnson, Scottie Webster and Les Hendry. Stan was a hard worker and was very passionate about his family. He absolutely enjoyed being a grandfather to his seven grandchildren. He will be sadly missed by all who knew and loved him. We would like to thank the staff that cared for Dad at the Deloraine Health Centre and Delwynda Court Personal Care Home. Special thanks to Cheryl, Sarah, Regina, Grace and Dr. Brackenreed. The funeral service was held from the Victoria United Church, Melita, MB on Tuesday, November 18, 2014 at 2:00 p.m. with Rev. Allan Gairns officiating. Interment took place at the Napinka Cemetery. A time of lunch and visiting followed at the Napinka Drop-In Centre. In lieu of flowers, if friends desire, donations in memory of Stan may be made to the Heart and Stroke Foundation, 824-18th Street, Unit 3, Brandon, MB R7A 5B7 or to the CancerCare Manitoba Foundation, 1160-675 McDermot Ave., Winnipeg, MB R3E 0V9. Arrangements in care of Redpath Funeral Home - Melita (204-522-3361), Neil Redpath & Kurt Ardron. To send condolences to the family, please visit: www.redpathfuneralhome.com