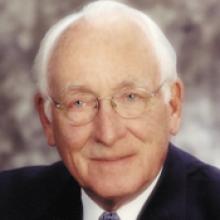 ANDREW (CLAIR) MURRAY Andrew "Clair" Murray of Brandon, beloved husband of Mildred, passed away peacefully at his residence on November 21, 2014. Clair was born at Lyleton, MB on February 26, 1925 to Andy and Verlie Murray. The family moved to Souris, MB in 1926 where his father opened Murray's Garage. Clair served in the Royal Canadian Navy during the Second World War. On his return, he and his brother Ewart took over the family car dealership in Souris. This is where his lifelong love of buying and selling cars began. In 1954, Clair met and married the local home economist, Mildred Clark. Their wonderful marriage continued for 60 years producing four sons, 12 grandchildren, and one great-grandchild. Souris is a hockey town and, like all Murrays, Clair loved hockey. He played alongside his two brothers for the Souris Elks, even after moving to Brandon. He also played senior hockey with the Brandon Molson Pioneers in the 1970s. In 1960, Clair purchased Brandon Automobiles Ltd. and relocated his family to Brandon. In 1971, he founded Murray Chev Olds Cadillac. Clair was well-known for his business acumen, and he was very proud that all four of his sons followed in his footsteps. The company grew to become the Murray Auto Group. Clair was an outstanding mentor to his sons as well as employees and partners. He touched many people in his business dealings. Clair effortlessly cultivated respect and enjoyed valued friendships throughout his life. During a nearly-70 year career in the automobile industry, it was not the many awards that defined his success but rather his affinity for his staff and genuine interest in their lives that provided the example of his compassionate, modest nature. Clair and Millie have been keen supporters of many community projects throughout their lifetime. Clair was an avid private pilot and used his piloting skills to visit his dealer partners and dealerships across Western Canada. His sons enjoy many fond memories of family trips and time at their holiday home near Clear Lake. Clair loved to barbeque with a salt shaker in one hand and a tasting fork in the other. The adventures with his family also included hunting and fishing expeditions. Clair was a caring father and loving husband who loved nothing more than to gather all his sons, their wives, and his grandchildren around his table for family dinners. Clair loved his grandchildren and could often be found with one on his lap, often in the midst of much chaos. He always put the interest of his family ahead of his own. Millie and Clair were an extraordinary example of a marriage defined by mutual respect, kindness, and love. His numerous friendships were marked by his loyalty and support. As his family has learned during this difficult time, there are many people who have expressed their eternal gratitude for his guidance and love. Clair's spirit will live on in his four sons, grandchildren, and great-grandchildren: Doug (Laurie), Lyndsay, Megan (Mason Raymond), great-grandson Max; Paul (Kim), Logan, Madison, Kelly, Eden; Dan (Kelly) Mitchell, Doug, Brynn, Grayson; Chris (Chantal), Liam and Owen. Clair was predeceased by his brother Ewart. He will be fondly remembered by Ewart's family, his brother Del and his family, and his sister Bernice and her family. A Celebration of Clair's life will be held at Central United Church, 327-8th Street, Brandon, on Sunday, December 7, 2014 at 3:00 p.m. with Mike Waddell officiating. In lieu of flowers, those wishing to remember Clair may honor his memory by making a donation to: Brandon Area Community Foundation, DPO Box 22096, Brandon, MB R7A 6Y9. Messages of condolence may be placed at www.brockiedonovan.com. Arrangements are in care of Brockie Donovan Funeral & Cremation Services, Brandon, (204) 727-0694.