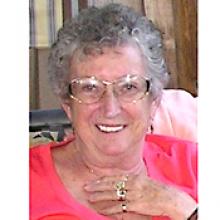 DORIS (GIRARDEAU) STONE (nee NAULT) It is with great sadness we announce the passing of our dear sister Doris on November 20, 2014, peacefully at her home in Penticton, BC. Doris is survived by her husband Henry, son Richard and stepdaughters, Jillian and Janice, brothers Rene, John (Lillian), Robert (Marguerite), Alfred (Elsie), Michael (Donna), Gabriel (Claudette), Bernard (Karen), sisters Madeline (Albert) and Gisele (Murray), plus many nephews and nieces. She was predeceased by her parents Delphin and Lea Nault, brother Jules, sister Agnes, her first husband Rocky, and sister-in-law Gwen. Doris spent her younger years in Letellier, MB. She left school early to work to help out the family. This didn't stop Doris from pursuing a degree. She later went to night school and graduated with a B.A. Degree. She decided to leave Letellier to the City of Winnipeg to work full time. She was deeply involved with Toast Masters. She spent most of her career working for R.B.C. and later decided to move to Penticton, BC for her retirement years. During that time she pursued her love of painting art and doing crafts. She also enjoyed volunteering at the Penticton Hospital as well as going on many trips and cruises. Doris will be sadly missed, but lovingly remembered. There is no plan for any formal service. A celebration of her life will be held at a later date in Winnipeg, MB.