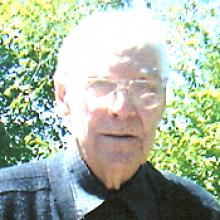 ARTHUR C. HOPFNER Peacefully on Sunday, December 7, 2014, at the Ste. Rose General Hospital, Arthur C. Hopfner passed away at the age of 97 years, the last surviving member of his birth family. Arthur was predeceased by his cherished wife of 66 years, Léonie /Leona in 2006, his dear daughter Lois in 1998, and his son-in-law Richard in 2009. He leaves to mourn his passing and cherish many fond memories, his loving daughters Janet Blanchard, Mary Keitel (Tom) and Carmel Hopfner, his devoted sons Joe (Barb), Dwight (Cathy), Caron (Elaine), Glenn (Rosemarie) and Ivan Hopfner. Together Dad and Mom committed so much time and caring to the family that as a result the grandchildren were greatly influenced and impacted by the fine example they set. Tammy, Laurel, Carla, Meaghan, Dena, David, Jonathan, Jason, Aiden, Tim, Daniel, André, Joseph, Stephanie, Aynsley, Evan and Janni all continue to live and raise the numerous great-grandchildren and extended family in an atmosphere of support and love for one another. The numerous offspring are steadily increasing, spreading across Canada and around the world. Arthur was born in Lake Lenore, Saskatchewan on October 11, 1917. In 1935, he came to his beloved Methley with his parents to set up a grain farm, which operates on a larger scale to this day. Dad was an accomplished saxophone player and together with his brothers and sisters, formed a band "The Rhythm Aces" and entertained at many dances in the area. After his marriage in 1940 and the start of the family, Art and Leona moved into the town of Ste. Rose du Lac in 1946, where he was very community minded. He and Leona both enjoyed curling in the winter, and in the summer much time was spent at Methley Beach and Manipogo with family and friends. Art loved to read, and he placed great value on learning, ensuring that each of his children had the opportunity for further education. Home was everything to Dad and he had a favourite visiting spot at the kitchen table. Many wonderful meals, much coffee and cake, beer and wine, cribbage and other games were shared at that loving table. After Leona's death, Dad remained in the family home with attentive care from Ivan, Dwight and Cathy, Glenn and Rosemarie. The Ste. Rose homecare group and Meals on Wheels kept him healthy for a good long while. Cindy Masson was also a constant friend and caregiver. Thank you so very much! The family also wishes to thank the kind staff at the Dr. Gendreau Personal Care Home, where Dad spent his last few years. The memories both happy and sad are many; the fun, laughter and music remain. Stories will be retold again and again. Funeral Mass will be celebrated on Saturday, December 13, 2014 at 2:00 p.m. from Ste. Rose de Lima Roman Catholic Church, Ste. Rose du Lac, Manitoba. Fr. Leo Fernandes as celebrant. Interment to follow in the Ste. Rose Cemetery. Flowers are gratefully declined, should friends so desire, donations may be made in memory of Arthur to the Dr. Gendreau Personal Care Home c/o the Prevost Foundation, Box 60, Ste. Rose du Lac, MB, R0L 1S0 or to a charity of one's choice. Sneath-Strilchuk Funeral Services, Ste. Rose Chapel 204-447-2444 www.sneathstrilchuk.com