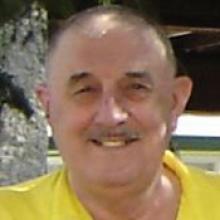 GEORGE PETER SAWATSKY 1932 - 2014 Peacefully on Saturday, December 6, 2014 George passed away at Poseidon Care Centre following a lengthy illness, at the age of 82 years. Several severe strokes left him unable to walk. Left to survive George are his sisters, Helen Dorman (late Merton), Guelph, ON, Anne Warkentin (late Peter), Winnipeg; stepbrother Jake Bergen in British Columbia; 14 nieces and nephews plus their spouses and children in Ontario, Manitoba, Alberta and British Columbia; many cousins in Manitoba, British Columbia and Ontario, and two uncles, David Sawatsky and Dick (Mrytle) Sawatsky in St. Catharines, ON. He was predeceased by his wife Pat (2001); mother, Mary (Bergen 1957); father, Peter Sawatsky (2007), and stepmother Tina (2012). George was born in Fleming, SK in 1932, and was the eldest of three children. Having been a cadet he enjoyed the company and fellowship of Veterans. He was a member of Legion Branch 252, and Branch 1 of the A.N.A.F, for over 50 years. A special thank you to George's neighbour, friend and caregiver Ralph Moan for looking after him these past five years. A Memorial Service will be held in the spring of 2015. The date will follow. Donations may be made in George's name to Poseidon Care Centre, 70 Poseidon Bay, Winnipeg, MB R3M 3E5. Wojcik's Funeral Chapel & Crematorium, 2157 Portage Avenue, 204-897-4665, is in care of arrangements. wojciksfuneralchapel.com