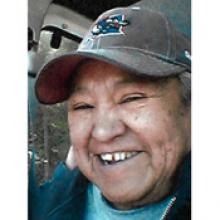 GLORIA ANN YOUNG October 1, 1959 - December 12, 2014 After a courageous battle with cancer, Gloria Young, aged 55 years, of Bloodvein, MB passed on in her own home. Gloria was born in Bloodvein on October 1, 1959 and lived her early years there before moving to Winnipeg where she could remain close to her siblings and other cherished family and friends. She returned to Bloodvein for the last few years of her life until the morning of December 12, 2014. Gloria had a wonderful sense of humor. She loved to laugh but more to make another. She enjoyed playing cards, drawing, writing, working, but most important to her was being able to spend time with loved ones. She is survived by her daughter Geraldine; grandchildren Dakota, Dwight, Jerilyn, Spencer and Landon; her sisters Eileen (Garry), Celia; her brother William (Hilda); special niece Melissa (Frank); numerous nieces, nephews, cousins and friends. Gloria was predeceased by her parents Donald and Maggie; her sisters Valerie, Evelyn and Christine; her brothers Alphonse, Romeo and Raymond. Wake service will be held on Tuesday December 16, 2014 from 7:00 p.m. till midnight at Eternal Grace Funerals. Wake services to follow on Wednesday December 17, 2014 at Bloodvein Band Hall, Bloodvein First Nation. Funeral service will follow on Thursday December 18, 2014 at 1:00 p.m. also at the band hall, Fr. Rheal Forrest officiating. Thank you to Dr. Valerie Gordon and other staff at Cancer Care Manitoba. Eternal Grace Funerals 204-505-4559