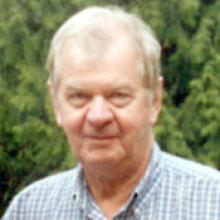 GEORGE VICTOR NORBERG George Victor Norberg, of Brandon, formerly of Winnipeg and Meadows, Manitoba passed away at the Brandon Regional Health Centre on Thursday, December 11, 2014. George was born to Maria and Julius Norberg on May 24, 1939 in Winnipeg. He was the youngest son in a family of eleven children. Farm life was good, being surrounded by five brothers and five sisters and lots of animals. He attended Meadows School up to grade eight and then went on to Mulvey School in Winnipeg. He later received his GED. George's first job was with CN. He loved trains and that didn't change in his lifetime. He spent 26 months up north on the Dew Line, climbing a lot of poles for CN and the Dew Line. George began his electrical courses at Red River Community College, shortly after marriage. Upon graduation from Red River, George worked as an electrician in the Griffith Mine in Northern Ontario. He returned to Winnipeg for another electrical course and was hired on at the Red River Community College as part of the maintenance staff. He worked for the Provincial Government in Brandon at the Brandon Mental Health Centre, Assiniboine Community College and on the district. He worked for them for 30 years. In 1999, he retired but became bored, so he took on a part-time job as a security guard and later as a driver for Hallcon for the next 11 plus years. He was still active with the company at the time of his death. George really loved driving for Hallcon especially because he was once again around trains. George belonged to and was active in Civil Air Search and Rescue Association and the Brandon Flying Club. He loved flying and everything pertaining to it. His first pilot's licence was for an ultralight plane and later earned his recreational pilot's licence. George flew as much as possible and enjoyed the opportunity to take family and friends for a ride. He loved trains, planes and vans. George enjoyed travelling which included trips to Europe, the Caribbean, Mexico, Australia, South America, the United States as well as several times across Canada. George also loved camping, gardening and working in his yard. The sparrows were special and feeding them was important to him. He was the only one we know who made sure the bird bath had water not ice. George's family was very important to him and he felt blessed by his wonderful grandchildren, Heather, Julia and Kai. George is survived by his wife, Olive, of 48 years; daughters Dianne (Roy Norris) and Carole (Doug Learning); grandchildren, Heather and Julia Norris and Kai Learning; a brother Gunnar (Delphie); two sisters Regina Taylor and Ruth Nordstrom (Lawrence) and a sister-in-law, Kay Norberg, plus numerous nieces and nephews. He was predeceased by his parents Maria and Julius Norberg; siblings Eric (Dorothy), Sam Taylor, Freda (Stan Woods), Em (Bob Farmer), Ron Norberg, Len (Elaine) Norberg, Ed (Joy) Norberg, Vi (Ralph Shields), nephew Brian Woods, niece Karen Smart, nephews Darryl Norberg, Arnie Norberg, great-nephew Patrick Smart and great-niece Daphne Smart. The Funeral Service will be held at First Baptist Church, 3881 Park Avenue, Brandon on Wednesday, December 17, 2014 at 1:00 p.m. with Pastor Paul Stade officiating. Pallbearers are Rick Norberg, Bryce Norberg, Harvey Laluk, Tom Czerkawski, Ken Fox, and Garry Gerrard. Interment will take place at Chapel Lawn Cemetery, Winnipeg. Donations in memory of George may be made to First Baptist Church, 3881 Park Avenue, Brandon, Manitoba, R7B 3Y6 or to the Heart and Stroke Foundation, 3 - 824 - 18th Street, Brandon, Manitoba, R7A 5B7. Expressions of sympathy may be made at www.memorieschapel.com. Arrangements with Memories Chapel & Pre-Planning Centre, 1-888-694-8153.