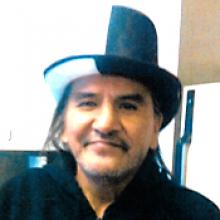 DAVID JAMES BEARDY (ROBBIE) August 21, 1957 - December 11, 2014 It is with great sadness we the family announce the passing of our beloved husband, father, grandfather, brother, uncle, nephew and cousin David James Beardy (Robbie) who passed away suddenly on Thursday, December 11, 2014 at St. Boniface Hospital with his family by his side. Robbie leaves to mourn his passing the mother of his children, Beverley; daughters, Denise (Jesse), Angela (Kevin), Jennifer, Crystal, Stephanie (Mason); sons, David Jr., Christopher (Courtney), Michael, Matthew, Calvin, also Shanestine, Sharissa, Shariece, Kamara and Darius who he raised and took as his own, also many grandchildren, mother-in-law, Mary Sinclair, father-in-law, Peter Mcpherson; his only surviving sister, Ida; brothers, Nicolas (Vivian), George (Darlene) and Kelly. Robbie was predeceased by his daughter, Amanda who he loved dearly, grandchildren, Gage and baby Joyce; parents Julius and Alice Beardy; sisters; Linda (brother-in-law Nelson), Barbara, Martha; brothers, Stanley, Sam, William; sister-in-Law, Christina Beardy; nanny, Frances Sinclair and numerous other family members also. Wake Service will be held on Wednesday, December 17, 2014 and Thursday, December 18, 2014 from 6:00 p.m. until midnight at Eternal Grace Funeral Chapel, 1111 Logan Avenue at McPhillips St. Funeral Service will be held on Friday, December 19, 2014 at 11:00 a.m also at the Chapel with Clarence Morse officiating. Cremation to follow. We the family would like to thank the Chief and Council at Lake St. Martin Band and a special thanks to Maurice Traverse (brother-in-law). Eternal Grace Funerals in Care of Arrangements 1111 Logan Ave 204-505-4559