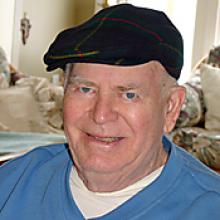 KENNETH GORDON MCCANNELL December 5, 1928 - December 16, 2014 On December 16, 2014 Ken died peacefully at Prairie View Lodge in Pilot Mound, Manitoba, having just celebrated his 86th birthday. He is survived by his wife Fay; daughters Marilyn Hall (David) of Raleigh, NC, Kathryn McCannell (Grant Mountain) of Victoria, BC, Jane McCannell (Joe Van Belleghem) of Los Angeles, CA, and Lesley McCannell (Jack Traa) of Crescent Beach, BC; daughter-in-law Lorraine McCannell of Neepawa, MB; 10 grandchildren and four great-grandchildren. Ken was predeceased by his son Jeffrey; his parents Donald and Emma McCannell; brothers Grant and Ross; sister Jean Adams, and mother and father-in-law Violet and Bill Hillman. Ken was born on the family farm in the Copperfield district of Pilot Mound on December 5, 1928, the fourth child of Donald and Emma McCannell. The McCannell's had emigrated from the Isle of Islay, Scotland to the township of Minto, Ontario in the late 1900s. Later Ken's grandparents helped found the town of Minto, in North Dakota. His mother, Emma Gillan, was from the city of Honefoss, Norway. She and her family settled in the Minto area of North Dakota also. In 1920 Donald and Emma bought land in Canada, north of Pilot Mound, Manitoba, where they farmed and raised their family. As a youngster Ken loved the outdoors -- snowshoeing, duck hunting, deer hunting, and trapping gophers, getting a penny for each tail. Although he skipped school to engage in some of these activities, he did graduate from Grade XII at Pilot Mound Collegiate and then worked for five years in Winnipeg, at Trans Canada Airlines. In 1950 Ken first saw Fay Hillman from Snowflake playing hockey with the Pilot Mound Pepperettes, and knew he wanted to meet her. They became engaged in 1951, married in 1953, and over the next 61 years supported one another in all their endeavours. Both worked in Winnipeg until moving to Pilot Mound to take over the family farm in 1955. Ken formed a grain-growing farm partnership with his brothers Ross and Lorne and they worked together for over two decades, producing wheat, oats, barley, flax and canola. Then, under the name Hillshade Farm, Fay and Ken continued farming and also opened a Bed and Breakfast, enjoying guests from around the world. As a teenager Ken began his life-long passion for curling -- a sport in which he excelled locally and provincially, winning a 1957 Chevrolet car in the Edmonton Carspiel, representing Manitoba in the Massey-Ferguson Curl-O-Rama in Toronto and playing in nine provincial championships. In 1996 he was made an honorary life member of the Manitoba Provincial Curling Association. Ken coached and mentored many young curlers. Ken was an avid fisherman, twice qualifying as a Master Angler. For years he planned an annual trip to Manitoba's northern lakes with local friends and also enjoyed varieties of fishing in British Columbia, Texas, Hawaii, North Carolina, Ontario and the Northwest Territories. Closer to home, Ken was a year-round fisherman on Rock and Pelican Lakes. Ken's organizing abilities were evident in his involvement in the sport of golf, where he was instrumental in initiating tournaments. As a community member Ken played a leadership role in the building of the Kinsmen Swimming Pool, the installation of artificial ice in the curling rink, and exploration of possible economic opportunities for Pilot Mound. Ken was a loving grandfather who took pleasure in taking his 10 grandchildren on camping and fishing trips and letting them learn what rural farm life was all about. He and Fay enjoyed many travel adventures across North America, Europe and Australia / New Zealand. In 2009 Ken and Fay moved from the farm to a new home in the town of Pilot Mound, and in 2011 Ken became a resident of Prairie View Lodge. The family appreciates the high quality of care he received from all members of staff. As a family member and friend Ken will be remembered for his sense of fun, his warmth as a host, his barbecuing skills, his love of ice cream and his legendary shotmaking in both curling and crokinole. Cremation has taken place, and a celebration of Ken's life will be held in Pilot Mound in the spring. If friends so desire, donations in Ken's memory may be made to the Pilot Mound Foundation Jeff McCannell Spirit of Youth Fund, Box 235, Pilot Mound, MB, R0G 1P0, or a charity of your choice.
Publish Date: Jan 3, 2015

KENNETH GORDON (KEN) MCCANNELL Kenneth Gordon "Ken" McCannell beloved husband of Fay McCannell died peacefully at Prairie View Lodge in Pilot Mound, Manitoba on December 16, 2014 at the age of 86. In accordance with Ken's wishes cremation has taken place and a public memorial service will be announced and held at a later date. If friends so desire donations in memory of Ken may be made to the Pilot Mound Foundation Jeff McCannell Spirit of Youth Fund; Box 235 Pilot Mound, MB R0G 1P0, or to a charity of choice. Messages of condolence may be made online at www.wheatlandfs.com. Wheatland Funeral Service www.wheatlandfs.com (204) 825-2848
Publish Date: Dec 20, 2014