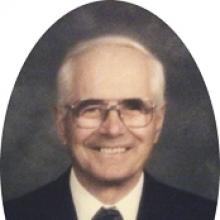 JOHN BILL POHAYCHUK Peacefully, surrounded with his family, John Bill Pohaychuk passed away after a courageous battle with cancer on Friday, December 19, 2014 at the Vita Health Centre at the age of 87 years. John will be remembered by his loving wife Anne of 63 years and his daughters Jean (Rod) Charney, Margie (Ivan) Paskaruk, Debbie (Lawrence) Andrusyk, Marilyn (Michael) Panchuk, six grandchildren and eight great- grandchildren. He will also be remembered by his two surviving sisters Lil (Bill) Pasko, Frances Moore and two sisters-in-law Olga Fedorowich and Ethel Pohaichuk. John was born on June 1, 1927 in Gardenton, Manitoba and married Anne Fedorowich on October 27, 1951. He spent the early years working in bush camps and then went into farming. He enjoyed gardening, carpentry, singing, carolling, and spending time with his family. Due to losing his eye sight, he retired early. He was devoted to his church and was president of the St. Demetrius Ukrainian Greek Orthodox Church for numerous years. Prayers will be said on Monday, December 22, 2014 at Vita Funeral Home 256 Railway Avenue Vita, Manitoba at 7:00 p.m. Funeral Service will be held also at Vita Funeral Home on December 23, 2014 at 10:00 a.m. with burial to follow the service in the St. Demetrius Ukrainian Greek Orthodox Church Cemetery three miles south of Gardenton, Manitoba. The family would like to thank the staff at the Vita Health Centre, the homelier workers and Steinbach Cancer Care for their care and compassion. If friends so desire, donations may be made in Memory of John to the St. Demetrius Ukrainian Greek Orthodox Church Gardenton, Manitoba. Dad, we will miss you. "Vichnaya Pamyat". Arrangements by Vita Funeral Home 256 Railway Avenue Vita, Manitoba (204) 425 3114