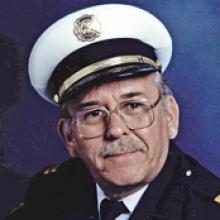 RICHARD (DICK) ROBERT KRUEGER 1931 - 2015 Peacefully, Dick passed away on Thursday, January 1, 2015, at the age of 83. He was predeceased by his parents Adolph and Amelia, his four sisters and two brothers. Those left to cherish Dick's memory are his wife Dolores, daughter Lindsay (Ben), son Terry (Kim), stepson Kevin (Liz), grandchildren Brandon (Dena), Adam (Jeanine), stepgrandchildren Kayla, Chelsea, great-grandchildren Tyson, McKenzie and Leighton, sister-in-law Ollie, as well as many nieces and nephews. In 1931 Dick, the youngest of seven children, was born on the homestead near the RM of Inglis, MB. During his early years he moved to Seven Sisters and Inglis before settling in Winnipeg, MB. Dick started his career with the City of Winnipeg in 1956 and retired in 1989 as the Chief of Mechanical Services with the Winnipeg Fire Department. During his spare time he had so many passions. Among them were playing guitar, spending time at the cottage, golfing and oil painting. A special thank you goes to his nephew Ron Koss for all his caring and support. A Celebration of Dick's Life will be held at 2:00 p.m. on Tuesday, January 6, 2015, at Chapel Lawn Funeral Home, 4000 Portage Ave., Winnipeg, MB. For those who wish to sign the online Guest Book please visit our website. www.chapellawn.ca 885-9715