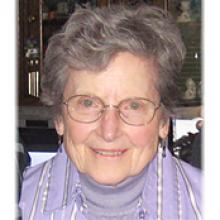 ROSE ALMA SABOURIN-AQUIN 1927 - 2014 Rose-Alma Sabourin-Aquin was the ninth child of 13 to Exilda and Ildege Sabourin in St. Jean Baptiste on September 12, 1927. She attended school there until Grade 10 and, because of her keen math sense, was asked to become a bank teller for La Banque Nationale in this town and did so until 1948. That year she married her long time musical partner J. Donat Dupas, who accompanied her piano playing skills on the violin. This union provided them with two children, Lynne Urbanowski (Ernie) and Robert Dupas (Debbie). Rose-Alma was blessed with five grandchildren, Kevin Woodley, Christine Eiteneier (Kim), Robyn Urbanowski (Dallas Gade), Nicole Dupas (Erin Parent), Camille Dupas (Dave Banks) and three great-grandchildren, Michael Vanderveen, Rayne and Emma Eiteneier. She (Rose-Alma) was predeceased by her parents and seven brothers, Ovila, Armand, Georges, Louis, Cyrille, Denis and Leon and one sister Leona. She leaves to mourn her surviving siblings Andre, Helene, Lucille and Denise. She was also predeceased by her husband J. Donat Dupas in 1997 and her second husband Lionel Aquin in 2000. Swan River became her new home in 2004 where she resided at the Rainbow Senior's Lodge until 2013 when she became a resident at the Swan Valley Personal Care Lodge until her passing on December 30, 2014. Throughout her long life Rose-Alma maintained her love of music by playing the piano and sharing this talent with many organizations and community events. She was an active CWL (Catholic Women's League) member in various communities including Swan River and also enjoyed participating in a variety of church related activities. She truly enjoyed people as evidenced by her willingness to spend time and share with them. She will be sadly missed by family and friends. Rose-Alma Sabourin-Aquin's memorial service will take place at the Chapel of Swan Valley Funeral Services, Swan River, MB on January 8, 2015, at 7:00 p.m. Officiating will be Father John Okuson and will include a special invitation of the CWL membership of Swan River. The family would like to express their sincere gratitude for the tremendous care and compassion provided by all of the staff at the Swan Valley Lodge during her nursing home residency. The Honorary Pallbearers will comprise of her immediate family members and the inurnment shall take place at a later date. Should friends so desire, donations in Rose's memory may be made to the St. Columba Catholic Women's League, Box 1061, Swan River, MB R0L 1Z0 Swan Valley Funeral Services Ltd. 363 Kelsey Trail, Swan River, MB R0L 1Z0 (204) 734-5775 www.swanvalleyfuneralservices.com