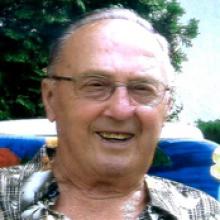 ELMER WINIARZ September 13, 1921 - January 1, 2015 On Thursday, January 1, 2015, Elmer passed away at the Grace General Hospital. Elmer will be miss dearly by his wife Angela; children Margaret (Noel), Patti (Elliott), Gerald (Joanne) and Jennifer (Michael). He will also be very dearly remembered for all of his love and affection by his grandchildren Ryan Cooley (Ally), Marlo Cooley (Mike), Bianca Winiarz, Sarah, Mark and Hannah Koury; as well as, his great-grandchildren Nathan (Marlo and Mike), Jackson (Ryan and Ally); and sisters-in-law Rose Morawski and Jean Winiarz. Elmer was predeceased by his parents Katharine and Anthony Winiarz; his brothers Julian and Ed Winiarz; and brother and sisters-in-law Minnie Morawski, Julie Morawski, Walter Morris, Anne Sapiak, Stanley Morawaski and Bertha Morawski. Elmer attended Holy Ghost Primary School and St. John's High School in the north end of Winnipeg. He spent two years in England, Germany and Belgium with the Royal Canadian Air Force during the Second World War. He taught his grandchildren how to sing all the wartime songs and would get a glint in his eye as he spoke about the good times he had. Dad has been a real hero and had the medals to show for it. Elmer will forever be remembered for his humour, kindness, patience, work ethic and his helpfulness to all that needed it ---- whether it was fixing cars, painting or handyman things, always doing this with a smile. Elmer and Angela, married May 8, 1948, were great "adventurers"! They spent their time travelling out east or into the U.S. on road trips; out to Grand Beach with the relatives; and their annual trek to Calgary to visit Jen, Mike and the grandkids. They travelled annually to their much loved "Hawaii" for about 12 winters and they spent a great deal of time at their beloved Hillside Beach cottage that they built together when Elmer retired from the Winnipeg Fire Department as Captain in 1984. He was also a great "educator" on all the realities of amputation and instead of complaining about his amputation, he would go to schools to educate children on his disability. His amputation never stopped him from enjoying life and getting out and travelling. He endured constant pain, but never complained. Elmer will be fondly remembered by all who knew him. And in his final days at Deer Lodge Centre, he was reunited with his lifelong friend Joe Scott of 75 years. They both added much happiness to their floor they lived on and were great companions for each other. Funeral Liturgy will be celebrated at 10:00 a.m. Friday, January 9, 2015, at St. Alphonsus Roman Catholic Church, 315 Munroe Avenue. In lieu of flowers, please make donations in Elmer's memory to the Deer Lodge Veterans Hospital. Cropo Funeral Chapel, 204-586-8044