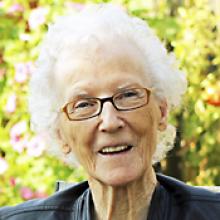 MARION PEARL MITCHELL (nee DRACASS) 1931 - 2014 It is with great sadness that we announce Marion's passing on December 20, 2014 at Vista Park Lodge in Winnipeg. Despite living with Alzheimer's disease in recent years, Marion remained spirited until the end and died peacefully in her sleep. Marion was predeceased by her parents Myrtle and Samuel Dracass, her sisters Ileen Kendall and Muriel Farstad, her brother George Dracass, and grandson Stephen. She will be lovingly remembered by her husband Burt, sister Doreen and brother-in-law Jack Waddell, sister-in-law Margaret Dracass, brother-in-law Gordon Kendall, son Todd and daughter-in-law Lucille, son Scott, grandchildren: Genevieve, Melissa, Hannah, Andrew and Emma, several nieces and nephews, friends and co-workers. Marion was born at home on the Dracass family farm near Sperling, Manitoba. She began her education in a one room school near the farm before attending high school in Sperling and Carmen. She graduated from Manitoba's Teacher College in 1951 and taught in Miami and The Pas before starting a position in Pine Falls in 1955, where she met Burt. Marion excelled in many sports including: curling, badminton, bowling and golf but her true love was softball. She played for the Sperling Girls Softball team from 1947 to 1952 as pitcher and left fielder. In 1951, the team reached the finals of the Red River Valley Tournament in Fargo and in 1952 won that championship. The team was inducted into the Manitoba Softball Hall of Fame in 2009. The following years, Marion played in the Senior Girls Softball League in Winnipeg with IPAC and the Ramblers; her name appeared frequently in the sports highlights of the Free Press. Marion took a long leave from teaching so she could attend full-time to raising her sons Todd and Scott. In her spare time, she was an active member of the Pine Falls United Church, organized the badminton club and ran Mitchell Sports' from the basement of the family home. Her love of sports took her back to the Pine Falls School as a part-time physical education teacher in 1970. In 1982, she accepted the position of Executive Director of the Eastman Sports Development Association. She held this position for the next 14 years during which she became well known in the provincial amateur sports community for her enthusiasm, commitment and leadership. Marion was always very appreciative of the many volunteers with whom she worked with closely over the years. Marion and her family were very proud of her contributions towards sports. Marion will be sadly missed by her family, friends and all those who came to know her over the years. She will always be remembered for her kindness, charity and spirit. A small family service will be held at Windsor Park United Church followed by interment in the church's Memorial Garden. In lieu of flowers, donations may be made in Marion's name to Kids Sport Manitoba, Eastman Region, Box 50, 20 - 1st Street, Beausejour, MB R0E 0C0. The Coutu Family in care of arrangements: E.J. COUTU & CO. FUNERAL DIRECTORS 680 Archibald Street 204-253-5086 ejcoutu.com