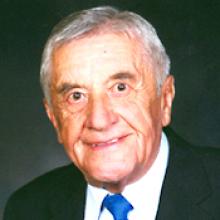 ROBERT (BOB) MACKALSKI (MICHALSKI) As a father; for let the world take note I shall not look upon his like again. (HAMLET, Shakespeare). Surrounded by his beloved wife and children, Robert MacKalski surrendered his soul to God on January 4, 2015, at the Brandon Regional Health Centre. Robert was born to Polish immigrants, Walter and Anna Michalski, in Brandon on June 5, 1923. As a child of the Great Depression his life was forged by adversity and poverty and his character defined by generosity, resilience and a strong work ethic. He attended St. Augustine School, Earl Haig and Brandon Collegiate Institute. He furthered his education at the University of Texas, Austin, where he majored in Transportation. Robert was a proud Second World War veteran. Responding to the call of his country he joined the Royal Canadian Air Force (RCAF#12) and was chosen for the prestigious precision squadron. Following the war he embarked on a distinguished career in administration with the Canadian Pacific Railways and Imperial Life/Desjardin Financial. Robert was an active parishioner of St. Hedwig's Polish Roman Catholic Church until its closing. Then he embraced St. Mary's Ukrainian Catholic Church as his spiritual home. As a friend and benefactor to St. Michael's Academy he served as EMCEE for countless graduations and formal ceremonies. He was the longest serving Knight of Columbus in the province of Manitoba with a commitment of greater than 70 years. As a fourth degree knight he was a strong prolife advocate and responsible for the initiation of hundreds of brother knights. He was a colourful character deeply committed to the community he loved, Brandon. His legacy includes almost 70 years of service to the Royal Canadian Legion including the Poppy Campaign and appointments to numerous boards including Crocus Credit Union and Crime Stoppers. He was proud to be one of the founding members of Christian Heritage School. Robert was dignified, handsome, kind, principled and a magnificent orator. Although Robert travelled widely his heart belonged to Clear Lake where he found beauty, joy and tranquility with his family. Bob considered his greatest achievement his 52 year marriage to the love of his life, Marlene. The marriage was blessed with four children and seven grandchildren with whom he shared his love for animals, especially dogs. He is survived by his loving wife Marlene and his children Dr. Barbara Ann MacKalski, Jacqueline Jackson (Douglas), Jennifer Savoie (Jean-Paul) and Dr. Robert MacKalski (Bianca). He will be especially missed in his role as Dziajiu to his grandchildren Andrea, Patrick and Sean Jackson; David, Elyse and Josee Savoie and soon to be born baby girl MacKalski. Robert was predeceased by his parents Walter and Anna Michalski and by his sister Genevieve Chornenki. Rosary and Prayers were said at St. Mary's Ukrainian Catholic Church on Friday, January 9, 2015, with Divine Liturgy celebrated Saturday (today), January 10, 2015, at 10:00 a.m. at St. Mary's Ukrainian Catholic Church, 927 Assiniboine Avenue, Brandon. Celebrant Rev. Fr. Michael Tkachuk. Interment to follow at the Brandon Cemetery. If friends so desire, donations in memory of Robert may be made to the Crisis Pregnancy Centre - Westman Inc., 229 Princess Avenue, Brandon or the Brandon Regional Health Centre Foundation, 150 McTavish Avenue East, Brandon. Expressions of sympathy may be made at www.memorieschapel.com Arrangements with Memories Chapel & Pre-Planning Centre, Brandon, 1-204-727-0330. "You built no great cathedrals that centuries applaud, but with grace exquisite your life cathedraled God " Frances Johansan