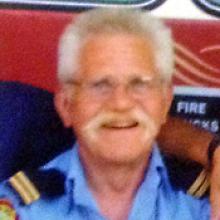 JOHN TEESDALE WEBSTER IV November 2, 1954 - January 7, 2015 After a courageous battle with cancer, in large part fought in silence and unknown to friends and family, Captain John was released from pain and suffering on Tuesday, January 7, 2015. Survived by his two sons, John Jr. and Kris, brothers Rick and Mike Webster (Karen), sisters Donna (Aime) Brunette and Susan (Ed) Schneider, he also leaves to mourn his passing seven nephews and three nieces, some of whom had very unique and special relationships with their uncle. Unable to accept the loss of her first born son, his mother Frances Webster left us two days later. John retired as Captain from the Winnipeg Fire Department on June 25, 2006, after 31 years and two months of service. He enjoyed afternoons at the Sherbrook Hotel shooting pool and talking with his friends, helping friends and family with whatever needed doing, and just being retired and in no hurry. Everywhere John went, somebody knew him from somewhere. He will be missed by many as evidenced by the parade of visitors of all walks of life who came to say their goodbyes to John at the hospital. Funeral Service will be held on Tuesday, January 13, 2015 at 2:00 p.m. at Chapel Lawn Funeral Home, 4000 Portage Avenue. www.chapellawn.ca 885-9715