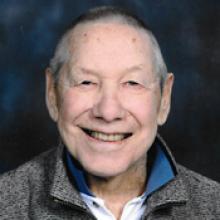 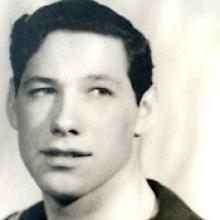 CLARENCE (WEZER) EDWARD BRIDLE July 29, 1926 - January 9, 2015 Wezer has left the court! After a full life of helping others before himself, Wezer decided it was time to rest on Friday, January 9 surrounded by his family. Wezer was predeceased by his parents John and Sarah, and brothers Charlie and Raymond. He leaves to cherish his memory his devoted wife of 59 and a half years, Joyce (nee Hague), and children Charlie (Melanie, Jonathan, Nicholas), Jim (Janice, Jenna, Jesse, Mason, Aaliyah), Clancy (Debbie, Kate, Sam), Jeff, Jan (Ken), Calvin (Janette, Rachel, Thomas), sixth son Phil, sister-in-law Ruth and family. Wezer was born in Winnipeg, growing up on Carlaw Avenue where he made lifelong friends. Tom Gigliotti became a huge part of Wezer's life and their friendship only strengthened over the years. At a young age Wezer enlisted in the navy, proudly serving during the Second World War on the Cowichan and St. Laurent as a signalman. Upon his return he resumed his carman position with the CNR, retiring after 42 years. Wezer met and married his beloved Joyce, moving to the Riverview area to raise a family. Wezer's love for family was obvious and all holidays were celebrated with his unique style and gusto. His grandchildren were his pride and joy and his support was evident in whatever they tried. In a full gym or arena it was still only Papa's voice that all could hear! Although being involved in many sports, his true passion was volleyball which he discovered while playing at the YMCA during the 1950s. He proudly founded the Bandits volleyball team, playing alongside his brother Charlie and all their sons. Wezer experienced many successes in every aspect of the sport; coaching at the University of Manitoba, RRC, and leading the University of Winnipeg to two national championships; reffed at the 1968 and 1976 Olympic Games; became the first Canadian to ref at the International level; and helped establish the MVA and the WMVL. He actively played with the Bandits into his 70s and boasted he was still the best setter in the family! He treasured the special moments and friends he made along the way. Wezer's favorite place was his cabin at Grand Beach, telling all "It's the best place for a kid to grow up." Whether putting up new pennants, puttering outside, feeding the chipmunks with his grandchildren, watching a sunset at Rocky Beach with his best friend Bandit, or hosting happy hour on the deck, he was happiest surrounded by nature, family and friends. The family would like to thank everyone who touched Dad's life and made it so complete. He had an incredible memory, sharing stories that will last forever with all of us. "Love you Papa!" A celebration of Wezer's life will be held on Wednesday, January 14, 2015, 1:30 p.m. at St. Paul's Anglican Church, 830 North Drive (204) 475-7549. In lieu of flowers a monetary or volunteer contribution in Wezer's memory can be made to the charity of your choice; he supported the Winnipeg Humane Society and KidSport.