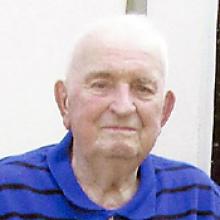 GEORGE SHYMKO It is with great sadness that we announce the passing of George Shymko on Sunday, January 11, 2015, at the age of 90. He leaves behind his wife Mary of 68 years, his daughter Carol Grenkow (Don) and son Brian Shymko (Donna). George leaves five grandchildren Ryan Shymko (Pamela), Rachel Grenkow, Jeffery Shymko (Jasmine), Rebekah Grenkow and Larysa Ressler (Garett) and three great-grandchildren Caitlyn and Kylie Shymko and Emma Ressler. George is survived by his brother Frank Shymko (Anne), three nieces Shirley, Barbara and Ivy and nephew Gordon. He was predeceased by his parents Fred and Anne Shymko, brother Martin, sister Pearl Danylchyuk and nephew George. George was born on May 6, 1924, in Dufrost, Manitoba. He was born into a farming community, a generation of strong work ethics and integrity. The family moved to Carlowrie where he attended a one room school house, where one teacher educated 50 students from Kindergarten to Grade 8. When the Second World War broke out Dad left the farm to ride the rails with other young men to find work in Saskatchewan. Upon returning to Manitoba he rekindled his friendship with his childhood sweetheart Mary Pupeza and they married on June 15, 1946. Dad worked for Jenkins Construction for a time. Because of his excellent skills with horses, he got a job managing Horse Shoe Riding Stable in the Keewatin/Brooklands area. He then worked for Modern Dairies until his retirement in 1989. Dad was a jack of all trades, skilled in carpentry, plumbing, electrical and mechanical. He could do it all and fix it all. Whenever anyone needed a hand he was right there helping out. In 1950 Dad and Mom purchased their house on Burrows Ave. and resided there until shortly before his passing. Dad loved to cook and entertain. Their home was open to everyone. There were always guests present and huge family dinners. He was an avid fisherman. His favourite fishing spot was George Lake in the Whiteshell. He loved a good game of crib. Dad was an ardent sports fan. He never missed a Blue Bomber game from the days of Bud Grant to the present. Toronto Maple Leafs were his favourite hockey team and he could talk endlessly about the players and their skills. Baseball was another sport he was keen on. Dad was in demand from his youth on for his skilled and powerful pitching. He pitched for the Carlowrie Baseball Team, playing the communities in southern Manitoba. He pitched for the Modern Dairies baseball team for years. His greatest passion was his garden. He prized his tomatoes and cucumbers. He was a conscientious family provider. He shared in his children's accomplishments and undertakings. He always knew what was happening and going on in our lives and looking out for us. Dad endured his waning health with strength and courage, he never gave up and we never gave up on him. Dad, although you have fallen asleep in death and it is heartbreaking to say good-bye, we have cherished memories in our hearts. See you in the resurrection. In memory of our husband, father and grandfather, a service will be held Saturday, January 31, at 2:00 p.m. in the chapel of Voyage Funeral Home, 220 Hespeler at Henderson Hwy.
Publish Date: Jan 17, 2015