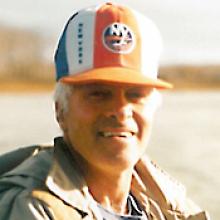 THOMAS (STYMIE) HAWTHORN LOVE Thomas (Stymie) Hawthorn Love passed away peacefully on January 13, 2015, at the age of 86, after a lengthy battle with cancer. Stymie was born in Dauphin on February 21, 1928 to Thomas Love and Rose Cobb. He married Yuela Marvis McDonald on November 21, 1951. Upon completing high school, he played Junior Hockey with the Brandon Wheat Kings, and acquired the masonry trade from his older brothers. He then worked in Trail, BC at the smelters and played Senior Hockey alongside friend Stan Chmiel. The two line mates returned to Dauphin to play out their hockey careers with friends Paul Allard, Billy Murray, Hughy Kerr and Stymie's brother Johnny. His love of the game inspired himself and others to apply for Dauphin's first MJHL franchise, the Dauphin Kings. Indeed Stymie went on to coach the very first two seasons and led them to a MJHL championship. That year the Kings made it to within one game of the Memorial Cup, losing to the Regina Pats. Stymie was also an avid outdoorsman. He and Yuela spent many days, and later their retirement at their beautiful cabin in Waterhen, hunting, fishing, gardening and golfing. Winters were spent in Corpus Christie and Osoyoos, BC. Stymie is survived by his daughter Lorie (Gord Smith), son Guy, grandchildren Riley (Brighton Anderson), Katie and Josh, and his great-granddaughter Charlie. He is also survived by his sister Lily and brother Johnny. He is predeceased by his wife Yuela, and his siblings Ernie, Jim, George, Evelyn, Elsie, Trigger, Birdie, Victor and Bob. He will be fondly remembered as a strong man with a tender heart for animals and his grandchildren, a lover of sports and competition, and all around sharp wit who was the life of the party. Our family would like to offer special thanks to Stymie's good friend Gerald Taylor and the community of Waterhen, who were so welcoming and protective of Stymie and Yuela, especially in the flood of 2011. We would also like to thank Dr. Trina Mathison and Dr. Mike Penrose, and the staff of the Dauphin Personal Care Home. We'll see you in the movies Grandpa. A funeral service will be held on Saturday, January 17, 2015 at 1:00 p.m. from Dauphin First United Church, Dauphin, MB with Pastor Scott Allen officiating. In lieu of flowers, donations in memory of Stymie may be made to the Parkland Humane Society. Sneath-Strilchuk Funeral Services were in care of the arrangements. 204-638-4110 www.sneathstrilchuk.com