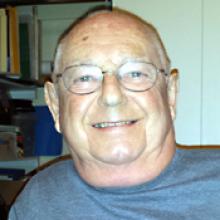 CONRAD (CON) BUTLER It is with great sadness that we share the news that our husband, father, grandfather, uncle, and friend, Con Butler, passed away on Saturday, January 17, 2015 at home in the company of family. Con was born on June 28, 1937 in Hanley, Saskatchewan to parents Ted and Becky Butler. He left home at 18 to attend university in Saskatoon where he achieved a Bachelor of Arts Degree. Con then moved to Winnipeg to attend the University of Manitoba where he graduated with a Masters of Social Work. Upon graduation, Con returned to Saskatoon and began his career working for the Province of Saskatchewan. Con met his future wife Enid Clayton whom he married in April 1965. Enid and Con moved to Winnipeg in 1966 where Con began working for The Province of Manitoba. After retirement Con and Enid continued to travel and enjoy adventures with friends and family. Con will be lovingly remembered by his wife of nearly 50 years, Enid, his daughter Susan and granddaughters Amber and Annabelle (father Gordon), daughter Jennifer and grandsons Aidan and Cian (father Rob), his sisters, Marg and Bea (Len), his brothers-in-law Alan and Laurie (Cadi) and their families and countless friends. He was predeceased by his older sister Louise. Con's legacy is his strength of will, his ability to overcome obstacles, his love of life and family and that no matter what, you keep smiling. Con made sure that we knew he was ready to go and that he was happy to have had a full, rich life full of love and laughter. The family wishes to thank the Palliative Care Unit of the Winnipeg Regional Health Authority and all the people who helped make Con's life so full and rich. A service celebrating Con's life will be held on Friday, January 23 at Augustine United Church, 444 River Avenue at 2:00 p.m. In lieu of flowers, donations can be made to the Grandmothers' campaign of the Stephen Lewis Foundation or a charity of your choice. The Coutu family in care of arrangements: E.J. COUTU & CO. FUNERAL DIRECTORS 204-253-5086 ejcoutu.com