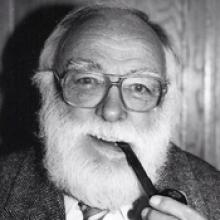 ERNEST CHARLES MUTIMER December 15, 1924 - December 27, 2014 Peacefully in his sleep with his family by his side, Ernie passed away on the morning of Saturday, December 27 at the Convalescent Home of Winnipeg, his home for the last four and a half years. Ernie is survived by his beloved wife Ann, his children Paul, Deborah McLeod (Gordon), Bryan (Rita), stepdaughters Caitlin Kowall (Aaron) and Aidan Topping, 12 grandchildren and six great-grandchildren. He was predeceased by his parents Charles and Doris, his first wife Norah and his oldest son David (JoAnne). Ernie was born and brought up in Winnipeg. In 1936 he travelled with his parents to France for the commemoration of the Canadian War Memorial at Vimy Ridge. He served in the RCAF as a navigator during the Second World War. After his discharge, Ernie attended St. John's College and obtained his BA. He then went to the Lorne Greene Radio Academy in Toronto. He started his career in radio in Kenora, Ontario as "Ernie the Early Bird". Ernie was a producer with the CBC in Winnipeg for many years working on Red River Jamboree and Happy Land. He spent two years in Malaya in the mid 1960s helping set up their first television network. He also spent three years in Trinidad and Tobago working in communications with UNESCO before his return to the CBC in Saskatoon. Ernie also wrote reviews for the Winnipeg Tribune and after his retirement he wrote a regular monthly column for the Manitoba Society of Seniors Journal. Ernie was also one of the group of retired media who set up the old-timers' radio station CKVN in 1995 to help celebrate the 50th anniversary of the end of the Second World War. He had a regular stint on the station playing music of the 1930s and 1940s which he loved. He was also a prolific writer of plays, books, and an operetta, Cannington's Manners, which was performed in Weyburn Saskatchewan for several years. We would like to give heartfelt thanks and a hand-kiss to his nurses Evelyn, Rita, Corinne, Lana, Adi, Justin and Rosalinda as well as all the healthcare aides who looked after Ernie with great care and gentleness. We always knew that he was in good hands. Cremation has taken place and, as Ernie wished, no funeral service is planned. A private family celebration of Ernie's life will be held in the summer at the family cottage. Rest well, Kupu Kupu. You are in my heart forever.