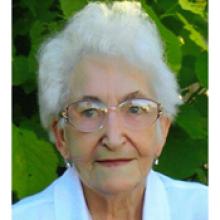 HERMINA (MIENIE) ZWIEP Peacefully on January 25, 2015, surrounded by her family, the angels came to take our mother home to be reunited with Dad, her husband of 52 years. Hermina (Mienie) Zwiep was born March 24, 1936 in Enschede, The Netherlands to Hendrik and Hendrika Huiskes and had 10 brothers and sisters. She was predeceased by her husband Gijsbertus (Bert) Zwiep, her parents, several brothers and sisters, and other family members in the Netherlands and Canada. Left to mourn her passing are her children: Marianne (Bill) Quigley of Winnipeg, Ria Zwiep of Portage la Prairie, Wilma (Albert) Reimer of Portage la Prairie, and Bart (Tanya) Zwiep of Steinbach. She also leaves behind five grandchildren: Justin Reimer, Caitlin Quigley, Sean (Karli) Quigley, Theo and Raina Zwiep. She is also mourned by her twin brother Albert (Jo), brother Arend (Grietje), brother Gerrit, sister Allie and a sister-in-law Roelie of the Netherlands, nephew Bill (Bea) Zwiep and their family, Jessica Brooks, and many nieces and nephews in Canada and Europe. She will also be missed by her wonderful home care workers, Roxanne, Beth, Brittany and Alana. Mom was so lucky to have these wonderful women in her life. Mom grew up in The Netherlands where she met and married Dad in 1957. In 1959 their daughter Marianne was born and in 1960 they immigrated to Winnipeg, Canada. Their second daughter Ria and third daughter Wilma were born in 1961 and 1962 respectively in Winnipeg. Mom was a wife and homemaker. She loved to sew and people would often comment on how well dressed her girls were. In 1965 the family moved to Portage la Prairie. Mom stayed at home to take care of her three girls while Dad went to work. She loved to bake bread, knit, crochet, do needlework and other crafts and was eager to teach us. In 1972 the family built a home in the Peony Farm. In 1973 their son Bart was born and the family was now complete. In 1968 Mom went to work and spent 23 years at The Manitoba Developmental Centre (MDC) in the Housekeeping Department. In her later working years at the MDC she was the housemother for the School of Psychiatric Nursing . She was Mom to many of the students and they still kept in touch with her until her passing. After retiring in 1991 Mom spent many hours in her flower beds and attending classes in ceramics a hobby she loved. Mom was a great Oma to her grandchildren and they will have many fond memories of her playing hide and seek, her Easter egg hunts, jokes and fun times. A service of remembrance will be held Monday, February 2, 2015 at 1:00 p.m. at First Presbyterian Church, 17 Royal Road South, Portage la Prairie, Manitoba. In lieu of flowers, donations can be made to the Portage la Prairie District Hospital Foundation, 524 Fifth St. S. E., Portage la Prairie, MB R1N 3A8. Arrangement entrusted to RONALD MOFFIT MEMORIAL SERVICES.