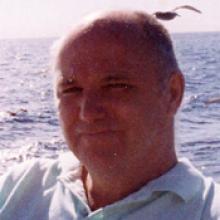 BRUCE PALMER Peacefully on January 25, 2015 our beloved father, grandfather and friend Bruce Palmer passed away. Bruce was predeceased by his wife Veronica, brother Brian, mother Anne and father Edwin. Left to cherish his memory are his children Karen (Réal), Peggy, Bart (Michelle) and grandchildren Danelle and Justin (Alexandra), sister-in-law Lorna and brother-in-law Sam, sister-in-law Shirley and many cousins. Bruce was born in 1935 and grew up in the West End and attended Daniel MacIntyre High School. He was passionate about football and was quarterback for the London Lords in Ontario and the Winnipeg Rods. In 1955, Bruce was inducted into the Sports Hall of Fame. In 1957, Bruce started working with the Winnipeg Fire Dept. #1 Station located downtown, where he advanced to Captain until he retired in 1995. Bruce married Veronica Wrobel in 1958 and soon started their family. First born Karen, then Peggy and youngest Bart. Bruce's love of nature and adventure took him and the family on many camping vacations. The family also spent many summers at his cottage in Winnipeg Beach. People were drawn to Bruce's friendly personality not afraid to strike up conversations with anyone that would stop to chat. His favourite nickname for his male friends was "Boss." Despite suffering a major stroke in 1995, Bruce rekindled his talent for painting and took classes once a week with the help of an artist. The family would like to thank his caregivers at Riverview for looking after Bruce during his 20 year stay. Also, special thanks to Len, Bill and David for those special Thursday meetings. A celebration of Bruce's life will be held at the Cropo Funeral Chapel, 1442 Main St. on Wednesday, February 4 at 10:00 a.m. Interment will take place after the service at All Saints Cemetery on Main St. In lieu of flowers, memorial donations can be made to the Manitoba Heart and Stroke Foundation or the Firefighters Burn Fund. Condolences can be sent to www.cropo.com. 204-586-8044