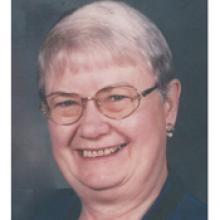 ELVA MARSCHALL Elva Marschall of Russell, Manitoba, formerly of Inglis, Manitoba, passed away on Friday, January 30, 2015 at the age of 80 years. Elva is survived by her children: Roy (Kim) Marschall of Shellmouth, MB, Earl (Louise) Marschall of Winnipeg, MB, Cheryl Marschall-Williams of Winnipeg, MB, seven grandchildren, three great-grandchildren, and brother Erwin (Theresa) Scheller of Langenburg, Saskatchewan. Prayers will be said from the Braendle-Bruce Funeral Chapel, Russell on Friday, February 6, 2015 at 7:30 p.m. The funeral service will be held from the Bethany Lutheran Church, Inglis, MB on Saturday, February 7, 2015 at 2:00 p.m. with interment following in the Bethany South Cemetery, Inglis. If friends so desire, donations may be made to the Bethany Lutheran Church, Inglis or to Russell and District Palliative Care. Remembrances and condolences may be emailed to bbfs@mymts.net Braendle-Bruce Funeral Service of Russell is in care of arrangements.