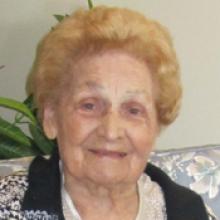 EVELYN MIGEL It is with great sadness that we announce the peaceful passing of our beloved mom, grandma, great-grandma, and sister, Evelyn Migel, on February 1, 2015, at the age of 94. Evelyn will be lovingly remembered by her children: Jim (Sherrie), and Dianne; grandchildren: Kris, and Pam (Rod); great-grandchild: Mackenzie; sister: Helen (Don), cousin: Rosie (John); and son-in-law: Leslie, along with nieces and nephews. She was predeceased by her husband Mike; parents Peter and Maria; children Lydia and Sharon. Born in Davyd-Haradok, Belarus, on April 13, 1920, she moved to Fox Valley, SK with her family at the tender age of nine. She lived there with her family for one year, before deciding to relocate to Manitoba, where they settled in Matlock, MB. During their time in Matlock, Evelyn and her family were extensively involved in the commercial fishing and trapping industry on Lake Winnipeg. In 1962, Evelyn and her family moved to Winnipeg, MB. Shortly after moving to Winnipeg, her husband Mike passed away suddenly. Evelyn, who was now widowed at a very young age, would go on to raise and care for her four loving children as a single mother. The need to support herself and her family motivated her to pursue a career in hairdressing. She loved her career, and eventually owned and operated Joys Beauty Shop for many years. Towards the end of her career, she decided to make the switch to teaching, and became an instructor at Pollock's Beauty School, where she made many lasting friendships. This is where she would work until her retirement, at the age of 71 years. After her retirement, although she still lived in Winnipeg, she would return to Matlock every summer, as Matlock was always where her heart was it was where she called home. She spent many memorable summers in Matlock with her family during "the golden years". This meant a lot to Evelyn, who had very strong family values. She was the heart of the family; always initiating family functions and encouraging the family to spend more time together. She had a huge passion for cooking, and spent countless evenings with her daughter Lydia and mother Maria, making cabbage rolls, perogies, borscht, cupcakes and cookies for her children and grandchildren. In her senior years, Evelyn sold her house on McAdam Avenue and moved to a seniors' apartment complex on Boulton Bay. Always enjoying a party, she spent countless hours playing cribbage, shuffle board, and bingo she would never turn down a night out at the casino. She had a love for shopping, and would never pass up the opportunity to embark on a good shopping excursion. As her health declined she moved on to Riverside Lion's Seniors Residence. She loved taking part in all of the activities at the facility. Special thanks to Judy #1 and Bruce for their devoted care. Evelyn spent her final couple of years at Tuxedo Villa where she received exceptional care by the staff. The family would like to extend our gratitude for the compassion shown to Evelyn in her final days. A service, with reception to follow, will be held at Thomson "In the Park" Funeral Home, 1291 McGillivray Boulevard on Saturday, February 7, 2015 at 10:00. Following the reception, interment will take place at St. George's Wakefield Anglican Cemetery. In lieu of flowers, if friends so desire, a donation in Evelyn's memory can be made to charity of their choice. THOMSON "IN THE PARK" 925-1120 Condolences may be sent to www.thomsoninthepark.com
Publish Date: Feb 6, 2015

EVELYN MIGEL It is with great sadness that we announce the peaceful passing of our beloved mom, grandma, great-grandma, and sister, Evelyn Migel, on February 1, 2015, at the age of 94. A service, with reception to follow, will be held at Thomson "In the Park" Funeral Home, 1291 McGillivray Boulevard on Saturday, February 7, 2015 at 10:00 a.m.. Following the reception, interment will take place at St. George's Wakefield Anglican Cemetery. Complete obituary will appear in Friday's edition. THOMSON "IN THE PARK" 925-1120 Condolences may be sent to www.thomsoninthepark.com
Publish Date: Feb 5, 2015