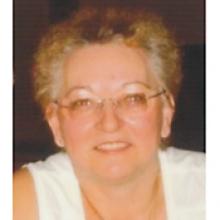 JEAN JOHNSON (nee SUMKA) 1957 - 2015 Jean passed away peacefully in Brandon on February 2, 2015 after a courageous battle with cancer. She is survived by her loving husband of 40 years, Wayne; her sons, Steven, Andrew, Michael (Kelly); her ex-daughter-in-law, Nina, and her grandchildren: Tatyana, Reanna, Serenity, Patience, Braelyn and Michaela. She is also survived by her brothers, Ron (Helen) and Jim, and her sisters: Marion (Wally), Barbara (Chris) and Carol (Daniel). She also leaves her in-laws: John (Jackie), Ron (Carol), Mary (friend Doug), Betty, Carol (Wayne), Lloyd (Elaine), and numerous aunts, nieces, nephews and cousins. Jean was predeceased by her parents, Mike and Elsie Sumka; her parents-in-law, Ernest and Lillian Johnson; sister-in-law, Lil Johnson; brothers-in-law; Denis Nagam, Dennis Sabovitch, George Gray, and her special cat, "Sam". Jean grew up on a farm near Poplarfield, Manitoba and attended school in Poplarfield and Fisher Branch. After marrying Wayne Johnson in 1974, she and Wayne moved to Winnipeg. In 1992, they moved to Brandon. Jean enjoyed growing flowers in her garden, doing various crafts, bowling, baseball and going to Country Fest. She especially loved Christmas and decorating the house and yard. The family wishes to express their thanks to the nurses and doctors at the Brandon Regional Health Centre for their compassion and care, also to all the family and friends that visited Jean in the last month. A Celebration of Jean's Life will be held at Memories Chapel, 330-18th Street North, Brandon on Monday, February 9, 2015 at 11:00 a.m. Celebrant will be Lydia Glawson. Interment will follow at the Brandon Cemetery. If friends so desire, donations in memory of Jean may be made to CancerCare Manitoba, 675 McDermot Avenue, Winnipeg, MB R3E 0V9. Expressions of sympathy may be made at www.memorieschapel.com Arrangements with Memories Chapel & Pre-Planning Centre, 1-888-694-8153