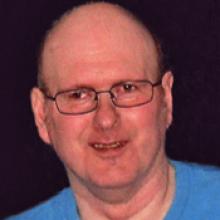 GEORGE STEPHEN (STEVE) YOUNG It is with heavy hearts that we announce the passing of George Stephen (Steve) Young on February 22, 2015, after a lengthy struggle with Multiple Sclerosis. He leaves behind his loving and devoted wife of 38 years, Francis; his children Jennifer (Lyle), Jeff (Mandy) and Jacky (Josh) Schoonbaert; and grandchildren Jayden, Jillian and Alyn. He also leaves to mourn his sisters Jane (Ken) Strachan, Nancy Ruth (Scovil) Fisher and Peggy (Marty) Kirby; brothers-in-law Hans (Brenda) Noort, Randy (Bonnie) Noort, Rob (Michelle) Noort and Rich (Cindy) Noort, as well as numerous nieces and nephews and their children. Steve was predeceased by his by his parents Rev. Wilbert and Velma Young, sister Mary Wolf, brother-in-law Karl Wolf and mother and father-in-law John and Diane Noort. Steve was born on July 9, 1954 in Pictou, Nova Scotia. His fondest memories were spending time at the family farm in Port Elgin, Ontario. If you couldn't find him, you could bet Steve was at the Saugeen River fishing. Much of his youth was spent playing music, working on his Roadster and enjoying woodworking. He also loved sports and was an avid Blue Jays and Maple Leaf fan. A defining moment for Steve was when he graduated from the RCMP Academy in Regina in 1974. His first posting was in Minnedosa where he met and later married Francis in 1977. Throughout his career, he was stationed in Boissevain, Amaranth and Arborg. Steve's last posting was at Crime Stoppers in Winnipeg before retiring in 1994, and made his final move to Rivers in 1995. These past few years, Steve was a worthy crib opponent and a constant source of amusement to the wonderful staff at the Rivers Hospital and Personal Care Home. As per Steve's wishes, cremation has taken place and no funeral service will be held. In lieu of flowers, donations in memory of Steve may be made to the Rivers Personal Care Home or Rivers Palliative Care, Box 428, Rivers, MB, R0K 1X0, or Rivers United Church, Box 444, Rivers, MB, R0K 1X0, or to a charity of choice. Messages of condolence may be placed at www.brockiedonovan.com Arrangements are in care of Brockie Donovan Funeral & Cremation Services, Brandon, (204) 727-0694