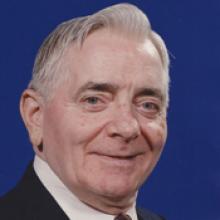 ROSS L. A. LITTLE With family at his side, after a wonderful life spanning 83 years, our beloved uncle, great uncle, brother and brother-in-law Ross L. A. Little, grasped his mother's heavenly hand and joined her on the 20th anniversary of her passing, February 21st, 2015. Ross was predeceased by his parents Lloyd W. Little and Jane B. Little and his sister Barbara E. Hurdle. He is survived by his sister Lois (Melvin) Hurdle, nieces Debbie (Jason) Kolaski, Wendy (Ron) Haynes, great nieces Melissa and Krystin Coyle, Jadyn Kolaski, Lisa and Stephanie Haynes and great nephew Matthew Haynes. Ross was born in Petrolia, Ontario on May 1, 1931. He moved to Winnipeg to work for Mel at Western Concrete Finishers and Duron Western. He had a hand in many of the major construction projects from 1963 through 1985. He made many friendships in the construction industry and built a repertoire of many hilarious tales from those years. After retiring from Duron Western, Ross took on a new profession at the St. Boniface Hospital Research Centre. They held him in high regard, Dr. Dhalla named him "Captain Ross" and said the Research Centre was never in better hands than when Ross was at the helm. Ross was awarded the Jack Litvack Exemplary Service Award in September, 1999 for his dedication to service and excellence to the St. Boniface Hospital Research Centre. Ross had the opportunity to meet many important dignitaries and award recipients from around the world and treasured the friendships he made there. Ross was always full of stories, poems and little ditties. He recited from memory "The Little Bee" and "He Grabbed Me By My Slender Neck" and countless others to any willing audience. We heard them thousands of times and never tired of the cute way he presented them. Ross enjoyed good health throughout his life and baffled the medical community with his lack of meds...just vitamins! He had an amazing memory which was challenged with dementia in the last few years, thankfully it never stopped him from loving, amusing and entertaining us. Ross never forgot those he loved the "most". We'll miss hearing "Hey Beautiful...There she is...What are you guys up to now?...Geez you girls can cook". He played the harmonica for every occasion (our Gran taught him how to play). He never missed any family event.... as family meant the world to him. He loved Debbie and Wendy's cooking and had an appetite like a lumberjack. Ross was also known for his Donald Duck impression....better than the original Disney Character and made many children happy on birthdays with a song or a chat. He loved Lindt chocolates, Kit Kats and oh my the day he tried his first Chocolate covered strawberries Blizzard he said "Deb you sure know where to find the good stuff'! Ross' beautiful blue eyes looked deep into your soul and radiated the love he felt for all of us, always followed by a warm wonderful smile. He was so gracious. Life was good ... he felt safe, loved and cared for and the staff at Riverwood Square 'Bach House' were also as special to him as he was to them. Uncle Ross always said "Geez I don't know why you guys do all this for me and we always answered "because we love you Uncle Ross". There will be a viewing on Friday March 6, 2015 at Chapel Lawn from 7:00 p.m. to 8:00 p.m. A celebration of Ross' life will be held at 2:00 p.m. Saturday March 7, 2015 at Chapel Lawn Funeral Home, 4000 Portage Ave. Winnipeg. In lieu of flowers donations can be made to The Winnipeg Humane Society or a charity of your choice. The Family would like to thank the staff at Riverwood Square and Riverview Health Centre for their wonderful care and kindness. Rest in peace our Beloved Ross, there is such a void without you.... we love and miss you so.... "SPEED-A-BY-DA-BO" until we meet again. For those who wish to sign the online Guest Book please visit our website. www.chapellawn.ca 204-885-9715