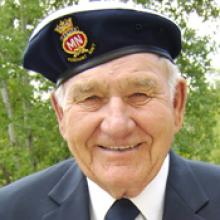 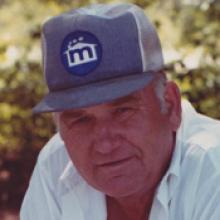 (CRABBY) STEVE MAKSYMYK January 7, 1924 - March 19, 2015 It is with profound sadness we announce the passing of (Crabby) Steve Maksymyk at the age of 91. He passed away peacefully at his home in Komarno, Manitoba. He is survived by his brother Paul (Doreen) and sisters Olga, Nellie (Bill), his two sons Steven (Mitzi) and Terry (Marlene), grandchildren Gretchen, Steven (Anna), and Katrina (David). He is predeceased by his wife, Mary (Minnie), infant siblings, Michael and Nettie, Joe (Elizabeth), Anne (John), Rose, Leona (Bill), and brother-in-law Louis. Steve was born on January 7, 1924 in Malonton to his parents Dmytro and Mary Maksymyk. He was raised alongside his brothers and sisters in Malonton before leaving home at the young age of 15 to work and then join the Merchant Navy in 1939. What was meant to be a short tour extended to seven years of service for the Royal Canadian Merchant Marine. Steve served as a fireman on the Merchant Navy ships, which were responsible for supplying the global Allied war effort. This tumultuous time saw Steve travel to all corners of the Earth and included service in both the Atlantic and Pacific theatres. Nearer to the end of his time in service, he adopted the name "Crabby" after a long night out in San Francisco. Upon returning from his time in the Merchant Navy, he met and married Minnie Skibo. Together they started Crabby Steve's Barn Dances which lasted for over 40 years. Famous in the Interlake, these barn dances were the epicentre of entertainment for the local population. Going to Crabbys on a Saturday night became the highlight of the week. For this, he will forever be remembered. Later in life, Steve enjoyed spending time with his family and grandchildren. He tended to his large garden despite a distaste for vegetables; frequently showcasing his gigantic tomatoes and pumpkins. He was always available to talk ("no problem" he said) and to have a beer, frequently citing "poor management" in response to his friends' woes. His dog, Gunnar, was the centre of his daily routine. Please join us at the memorial service and celebration of Steve's life on Wednesday, March 25, 2015 at the Teulon Rockwood Centennial Centre at 2:00 p.m. The family wishes that in lieu of flowers, donations be made to a charity of your choice or to Legion 141. MACKENZIE FUNERAL HOME TEULON 204-467-2525 mackhome@mts.net