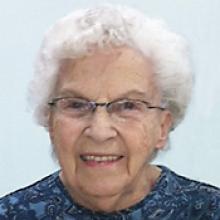 DORIS MAY POGUE (nee MORRAN) It is with great sadness that we announce the passing of our mother, grandmother, and great-grandmother, at her residence in Dinsdale Personal Care Home, Brandon on March 22, 2015. Mom was born in Grandview, Manitoba on September 22, 1923. She and her two brothers were orphaned as small children and were raised by her parent's cousins in Rathwell, Manitoba. She attended business college in Winnipeg and soon met our dad, John (Jack) Pogue. They were married on June 24, 1947 at the same church that her parents had been married in 1918. Over the next eight years, they lived in Winnipeg, had a business in Belmont, and later Dad, who had served in the war, re-engaged in the army. We were posted to Germany when Dad became ill and we were transferred back to Winnipeg. In 1960 at the age of 38, we lost Dad to cancer. In 1961 we moved to MacGregor, Manitoba. Soon after, Mom started working for McKelvy Agencies, and worked with them until her retirement in 1987. Mom was active in the Anglican Church, was a fabulous gardener and cook, and enjoyed playing cards and bowling. She raised five children on her own with unconditional love, courage, and a quiet strength that will be felt forever. Left to cherish her memory are her children David (Arlene), Colleen (Jim), Roger (Linda), Linda, Lyle (Diane), her grandchildren Kent (Maureen), Tracy, Brian (Elyssa), Dean (Lindsay), Shauna (Tyler), Jenny (Carson), Charlie, Kirby, and Jonathan, as well as five great-grandsons, and many nieces, nephews, and dear friends. Besides her parents and our dad, Mom was also predeceased by an infant sister Alice, and her two brothers, Jack and Frank. A private family interment will be held at Brookside Cemetery in Winnipeg. If friends so desire, donations in memory of Mom may be made to the Heart and Stroke Foundation. We wish to thank the outstanding staff at Dinsdale for taking great care of Mom since 2011. Expressions of sympathy may be made at www.memorieschapel.com Arrangements with Memories Chapel, Brandon, 1-855-727-0330 "In our hearts forever"