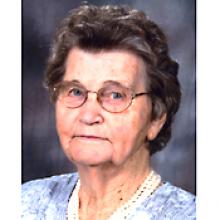 HELENA PENNER (nee REIMER) 1917 - 2015 On Monday, March 30, 2015 at Boundary Trails Health Centre, Helena Penner, aged 97 years, of Morden, MB, formerly of Kane, went to her eternal rest. She leaves to mourn her passing, four daughters, Anne and Henry Fehr, Martha and John Dyck, Marj and Alfred Dueck, Dorothy and Jack Giesbrecht; four sons, Martin Penner, George and Mary Penner, Abe and Lois Penner, Alvin and Debbie Penner; as well as daughter-in-law Helen (Jacob), 26 grandchildren and numerous great and great-great-grandchildren. She is survived by one sister and one sister-in-law. She was predeceased by her husband Martin D. Penner in 1990, one son Jacob, two daughters in infancy, Helen and Evelyn, daughter-in-law Terry and two grandchildren, Kelvin and Beverley. Viewing will be from 1:00 p.m. until 6:00 p.m. on Friday, April 3 at Wiebe Funeral Chapel, 1050 Thornhill St. in Morden and at the church prior to the service. Funeral service will be held on Saturday, April 4, 2015 at 2:00 p.m. at the Morden Mennonite Church, 363 Gilmour St. with interment to follow at Hillside Cemetery. In lieu of flowers, donations may be made in Helena's memory to the Tabor Home Building Fund, available at the church. Wiebe Funeral Chapel, Morden in care of arrangements, 204-822-4755 wiebefuneralhomes.com