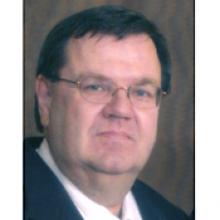 DONALD EARLE WOOD 1954 - 2015 On Thursday, April 9, 2015 at Boundary Trails Health Centre, Donald Wood, aged 60 years, passed away suddenly. Don was born on July 3, 1954 to Earle and Dorothy Wood in Brandon, MB. He grew up in Winkler, MB where he attended and graduated from Garden Valley Collegiate in 1973. He worked at the Bank of Commerce in Winkler, Winnipeg and Killarney between 1973 and 1975. He married Norma Mantey on December 8, 1974 in Plum Coulee. They celebrated 40 years of marriage this past December. In July 1975, he started work at the Morden Land Titles office until his retirement in 2009. He and Norma raised their four children in Morden and Don enjoyed many hobbies over the years: hunting, fishing, watching movies and hockey games and collecting anything from stamps to hockey memorabilia. He enjoyed spending time with and entertaining his five grandchildren. He is survived by his wife, Norma, four children, Christine and Louis Hoeppner (Dylan and Brooklyn), Robert and Lori Wood (Nikolas), Brenda and Dwayne Morrow (Ashley and Jenna) and Thomas Wood, his mother, Dorothy Wood, two sisters, Lynn Dueck, Cheryl and Malcolm Doney, three brothers, Craig and Doris Wood, Barry Wood, Wayne and Kim Wood and their families. He was predeceased by his father, Earle Wood in 1997, his mother-in-law, Eva in 2002, and father-in-law, Robert in 2005. Private family viewing only. Funeral service will be held at 11:00 a.m. on Thursday, April 16, 2015 at Morden Mennonite Church, 363 Gilmour St. with interment at Plum Coulee Cemetery at 2:00 p.m. If friends so desire, donations may be made in Don's memory to the Muscular Dystrophy Association, available at the church. Wiebe Funeral Chapel, Morden In care of arrangements, 204-822-4755 wiebefuneralhomes.com