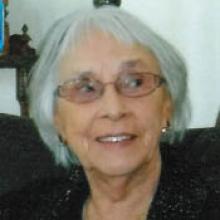 KATHLEEN CONSTANCE (KAY) MCLEAN Kathleen Constance (Kay) McLean (91 years) was born March 20, 1924 in Floral District to Minnie and John Izzard. She attended Floral and Goudenay Schools and high school in Pilot Mound. August 31, 1942 Kay enlisted in K Company of the Canadian Women's Army Corps. Following basic training at Ste Anne de Bellevue, QC she was posted to Shilo, MB. It was there that she met and married a fellow soldier, John David (Ian) Neilson January 20, 1945. They were discharged in April 1945 and moved to Winnipeg. Their daughter Kathleen Sandra (Sandy) was born December 22, 1945. The Neilsons separated in 1954. Kay and Sandy moved to Pilot Mound. Kay was the bookkeeper at McLeods from 1955 to 1975. Kay married Milton Elswood (Mick) McLean in March 1975 and became a happy farm wife. They enjoyed travelling, fishing and were active with Pilot Mound Legion Branch #62. They retired in September 1989 and moved into Pilot Mound at 408 South Railway. Kay passed away at home on April 17, 2015 following a brief struggle with leukemia. She was predeceased by her parents John (1953) and Minnie (1996) Izzard, brother Royce (1977), sister Muriel Wagner (2003), grandsons Dwayne (1992) and Curtis Pritchard (2001). Kay leaves to mourn her husband Mick McLean, currently a resident at Prairie View Lodge, daughter Sandy (Paul) of Keremeos, BC, as well grandsons Scott (Yolande), Alexa, Rylee and Adam; Ryan (Valerie), Darren, Penny, Scott; granddaughters Jennifer and Kira; and nieces and nephews Loraine (Elmer), Maureen (Jim), Keith (Marlene), Bonnie (Bruce), Wendy (Gerry), Ida Cudmore and Brian Hughson (Lorna), Gail Brown and Margaret McLean. As per Kay's request, a private graveside service will be held at Greenwood Cemetery. Donations to the Salvation Army or Pilot Mound Legion are suggested in lieu of flowers. Messages of condolence may be made online at www.wheatlandfs.com Wheatland Funeral Service (204) 523-7791 - www.wheatlandfs.com