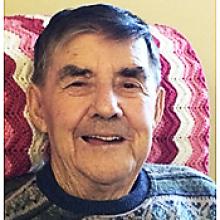 ALEXANDER (ALEX) GEORGE MACKAY It is with heartfelt sadness that we announce the passing of Alexander "Alex" George MacKay on Thursday, April 16, 2015 at the Minnedosa Personal Care Home, at the age of 87 years. Alex was the Clanwilliam New Year's baby, born on January 2, 1928, to Bob and Tillie MacKay. Alex grew up hunting with his dad and brothers and lifelong friends, forming treasured memories that had lasted a lifetime. He went on to farm with the Moads and Huttons before joining the CPR from 1948 to 1966, as a fireman and a written up engineer. During this time, he sold cars with Wilbur McLeod, until such time as he joined the Department of Justice as a Deputy Sheriff in 1966, until his retirement in 1984. Summers were spent in the old campground at Clear Lake around the kitchenette with special friends and neighbours from early May till the last dog was hung in late September. In their retirement years, numerous bus trips were taken with McPhail's Travel. Alex was predeceased by his parents, Bob and Tillie MacKay; sister Ruth Hodges; brother Stew McKay; brother-in-law Cliff Hodges; sister-in-law Elsie McKay; nephew Robert McKay; mother and father-in-law, Margaret and Pete Robinson. Alex met the love of his life Florence Robinson on New Year's Eve 1952 at the Armories in Minnedosa. They were married November 1, 1958. After 18 months of wedded bliss, Bruce was born in 1960, joyfully followed by Nancy in 1964. Alex will be sadly missed by his wife of 57 years, Florence; son Bruce and wife Sharone; daughter Nancy and partner Don; his grandchildren, Austin and Madisyn MacKay, who will cherish their Papa forever. In addition, his brother and best friend, Neil MacKay and wife Shirley; nieces and nephews, Donna, Gord, Sandra, Keith, Karen and families. Through his affiliations with the Minnedosa branch of the Royal Canadian Legion, Kinsmen Club and the Brotherhood of Locomotive Firemen and Engineers, he made lifelong friendships that he cherished to the end. Some of those friendships helped him through his most difficult times over the last several years. Alex's wishes were not to have a funeral service but an interment will follow at a later date. In lieu of flowers, donations in Alex's memory may be made to the Minnedosa Personal Care Home Patio Fund. Minnedosa Funeral Service in care of arrangements.