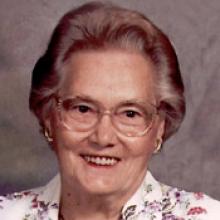 ANNI ENS (NIEBUHR) February 8, 1923 - April 24, 2015 Anni Ens (Niebuhr) passed away at the age of 92 on Friday, April 24, 2015, with her family by her side. Anni was born in Kronstal, Ukraine on February 8, 1923. She was the eldest child of Johann Niebuhr and Anna Krahn. Her father was a victim of the Stalin Gulag and was not heard from after he was taken in 1938. They would learn much later that he died in 1942. Anni completed her high school in Schoenwiese (now part of Saporoschje) and Osterwick in 1941. When she graduated she received a scholarship to study engineering in Simferopol in the Crimea, but by then war had broken out between Germany and the Soviet Union. This was to change her life forever. In 1943, she began a journey with her mother and sister Lydia that took them first to Magdeburg and Hannover in Germany, where she was baptized and accepted into the Gottingen Mennonite Church. In 1948, they immigrated to Winnipeg, Canada, and began a new life. She married Gerhard Ens on August 19, 1950, and they moved to Gretna, where Gerhard taught at the Mennonite Collegiate Institute (MCI), and where their five children were born and raised. Anni quickly earned a reputation for cooking and entertaining, especially for her famous MCI-teacher Christmas banquets. In the later years in Gretna, when the children were all in school, she became the head cook at the MCI residence. In 1977, after 30 years in Gretna, they moved to Winnipeg, where Gerhard became editor of Der Bote, and Anni joined the cooking staff at Canadian Mennonite Bible College. Both became active members of the Sargent Avenue Mennonite Church. They hosted reading groups, clergy meetings, Bible studies, and various conference delegates, and Anni's culinary reputation continued to grow. In 2008, when Gerhard was admitted to the Donwood Manor Personal Care Home, Anni moved into the nearby Kingsford Haus from which she made daily visits to see him. Anni had an indomitable will and was the foundation of her family. Wherever she lived was home. Her love for entertaining and cooking, especially for her children and grandchildren, never waned, and until the second last week of her life she was preparing meals for them. She is remembered with love by her children Helen, Anne and Michael, Gerhard and Denise, Werner and Christine, and Waldy and Janet; grandchildren Diana and Mathias, Philip and Felicitas, Rebekka, David, Brian and Dinah, Eric, Tommy and Catherine, Karin, Gerald and Lisa, Sarah, and Lynette; great grandchildren Jonathan and Paul; her sister and brother-in-law Lydia and John Klassen; as well as her large extended family and many friends. She was predeceased by her parents, Johann and Anna Niebuhr, husband Gerhard, brothers Peter and Hans and sister Lydia, and son-in-law Dietmar Ens. The funeral service will be held at 11:00 a.m. on May 12, 2015, at Sargent Avenue Mennonite Church, 926 Garfield Street, Winnipeg with viewing prior to the service. In lieu of flowers, memorial donations may be made to the Mennonite Foundation of Canada (12-1325 Markham Rd.), designated for the Gerhard & Margaretha Ens Endowment Fund Scholarship. FRIENDS FUNERAL SERVICE 204-339-5555