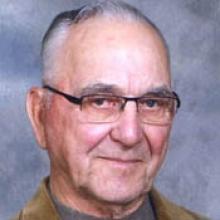 DONALD ELMER SAGER 1930 - 2015 It is with great sadness that we announce the peaceful passing of Donald Elmer Sager on May 3, 2015. Don celebrated life until the end and spent his 85th birthday on April 29 with a party on a beautiful spring day surrounded by family and friends. Donald is survived by his loving wife Betty; daughters Glenda Hemminger (Terry) Chilliwack, Janet McCue (Pete) Belleville; son-in-law Brian Burnett of Roland; stepchildren Joe Dunbar (Shannon) Altona, Brenda Sloan (Al) Morden, Joanne Dunbar of New York; grandchildren Brenda and Adam Burnett, Rachel and Kristen Hemminger, Leah, Sheridan and Mariah McCue, Tyler Sloan (Allison), Reid Sloan, Matthew Dunbar (Denise), Mallory Roovers (Sebastiaan), Molly Dunbar and four great-grandchildren Aubree, Olen, Dash and Felix; brothers Gordon (Betty), Howard (Oddney). He'll be lovingly remembered by his large extended family. He was predeceased by his loving wife Ruth; daughter Barbara Burnett; granddaughter Stacey Burnett; brother Lawrence and sisters Gladys and Evelyn. Don was the third of six children born in Morden to Ralph and Martha Sager. He grew up on the farm and returned to farming after trying his hand at mining and the oil patch. Don was a farmer at heart. Don volunteered in countless ways in the community throughout the years. He was involved with the Elks, Legion, Golf and Curling clubs. After family, his greatest love was golf. Don spent many hours on the golf course with his close friends and golfing buddies. He was very proud that he golfed his age last summer (84) even with that crazy swing of his. Don had a great sense of humour and was always up for a conversation. He will always be remembered for his smile and quick wit. His memory about events was truly admirable, he never forgot a thing! Cremation has taken place. Memorial service will be held at 2:00 p.m. on Wednesday, May 6, 2015 at St. Paul's United Church, 353 Thornhill St. in Morden with a private ash interment at Hillside Cemetery. In lieu of flowers, donations may be made in Donald's memory to the Boundary Trails Health Centre Foundation, Box 2000, Winkler, MB R6W 1H8. Wiebe Funeral Chapel, Morden In care of arrangements, 204-822-4755 wiebefuneralhomes.com