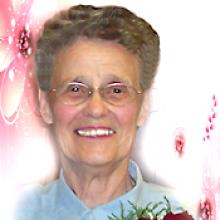 EVELYN HAZEL WINDSOR (Hazel) July 12, 1925 May 4, 2015 Evelyn Hazel Windsor passed away on Monday, May 4, 2015 at her residence, Fairview Home. Hazel was born in Brandon, Manitoba, July 12, 1925. As a youngster she lived and was raised in Rapid City, Manitoba. From there her family moved to "the farm" just outside Renown, Saskatchewan. At 17 years of age, she moved to Winnipeg, Manitoba, where she worked at Brinks, attended night classes to obtain her secretarial degree and worked various jobs on the weekends, including being a nurse's aide to the War Vets. She met her late husband on a blind date through mutual friends, and was married October 12, 1951. They had two children together; Lyle Windsor (Kim), and Colleen Melnyk (Tim). And the light of her life, three grandchildren; Tyler Windsor, Brian Windsor, and Ben Windsor. She moved to many small towns, as her husband worked for Pool Elevators, and worked for several law firms once her son was in school. On the birth of her daughter, it was announced that her husband obtained a new job working at the Canadian Wheat Board and the family moved to Swift Current, Saskatchewan. From there they moved to Brandon, Manitoba and remained in Brandon for the remainder of her life. She was predeceased by: her husband, Walter Clement Windsor "Clem"; her youngest brother, Norman Todd; Parents, William Parker and Vivian Parker (Todd). Remaining are her two children, three grandchildren, eldest sister Ellen Gaunt, younger sister Ethel Robinson (Don), and younger brother Ronny Todd. Hazel loved working in her yard and garden, and won many awards through the Horticultural Society. She was an impeccable seamstress and made many outfits for family and friends including Wedding dresses. She loved to bake and no one could beat her pies in competition. She took a class in Cake Decorating and ended up with a job from her instructor. She worked at Sally's Bakery for over 30 years decorating cakes, and her love; Wedding Cakes. She belonged to the Rebekah's Lodge, her church (Knox United in Brandon), Avon Cosmetics of Canada, and the Horticultural Society of Manitoba and Canada. Once she and her husband were retired, they went trailering and vacationing; fishing in BC, and of course visiting the grandchildren. The family always had one or two pets, sometimes more. But her favourite was the Pembroke Welsh Corgi. They had a few for the family, and eventually acquired several from her daughter. They gave her great comfort and companionship after her husband passed. Once she could no longer look after the house that love built (Mom and Dad) and the yard, she moved to Riverheights Terrace. She lived there for over five years, until moving to Fairview Nursing Home due to Alzheimer's. Here she passed very peacefully and we thank the staff for their care, kindness and compassion. Family and friends are invited to a time of visitation at Memories Chapel, 330 18th Street North, Brandon, on Monday, May 11, 2015 from 7:00 p.m. to 8:00 p.m. The Ceremony Remembering Hazel's Life will take place on Tuesday, May 12, 2015 at 1:30 p.m., also at the Chapel, with Rev. Craig Miller of Knox United Church officiating. Interment will follow at Rosewood Memorial Gardens. A reception will follow at Memories Chapel. Donations in memory of Hazel may be made to The Alzheimer's Society, Unit 4B-457 9th Street, Brandon, MB R7A 1K2. Expressions of sympathy may be made at www.memorieschapel.com. Arrangements with Memories Chapel, Brandon, 1-855-727-0330