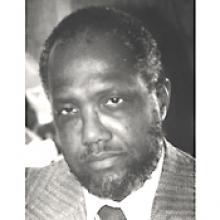 DONALD K. GORDON September 27, 1935 - 2015 We regret to announce the death of Donald K. Gordon on Wednesday, May 20, 2015 at Victoria General Hospital, Winnipeg. Son of the late T.Z. and Lily Belle Gordon, DK leaves to mourn his wife of 50 years: Lucinda, their daughter Lisa, son Kevin, daughter-in-law Natasha, grandson Miles, sister Joyce Townsend, brother-in-law Lloyd, niece Diane, nephew Chris, cousin Yvonne Maitland, and lifelong friend Keith Ellis (Zilpha). He will be sorely missed too by Keith Barrett (Jasmine), Adolph Edwards (Peggy), Owen Jefferson (Minkey), Al Matthews (Linda), Carole Jones, PJ Patterson, Lloyd Tait, Patsy Edwards, Violet Griffith, Hyacinth Lindsay, the Sandifords, Stephensons, Bryans, Flakes, Barber-Duecks, Koths, Jones, Adams, Campbells, Cookes, Raymonds, and by his in-laws and extended family: Rosemays, Smiths, Harrises, Millettes, Shades. DK attended Calabar High School in Jamaica, and earned his Ph.D. (1969) in Hispanic Studies at the University of Toronto. He was a member of the Department of French, Spanish, and Italian at the University of Manitoba from 1970 to 2001, and was named Professor Emeritus at the U of M in 2004. He enjoyed the friendship and scholarship of his departmental colleagues and the exchange of ideas with students, being proud of plaques given to him by graduating classes in 1979 and 1992. He served on the UMFA Board, U of M senate, and as Secretary-Treasurer of the Canadian Association of Hispanists. He took great satisfaction in the gratitude expressed by many students he encouraged, and sometimes assisted, to attend university. Professor Gordon's last book was Language and Racism Historicity. He was also the author of two books in Spanish: on Juan Rulfo, and Quince Duncan, of chapters in four books, consultant for two, and authored articles in major scholarly journals, writing also for the popular press. He was a dedicated member of the Afro-Caribbean Association of Manitoba (President 1972), whose philosophy of oneness, and seriousness of purpose to effect change, he cherished. Much of his community service and social life revolved around ACAM where he has numerous friends. For ACAM he produced an album of folk music by the Afro-Caribbean Singers: "Sun, Spirit and Soul," later re-issued as a CD; initiated the Black Historical Calendar; and did a video "An Audio-Pictorial History of ACAM". Prof. Gordon (ably assisted by the late Julian Robinson, and by Austin Stephenson) served as Jamaican Honorary Consul at Winnipeg from 1981 to 1999, and liked the collegiality and work, of the Consular Corps of Winnipeg. In 2000, the government of Jamaica conferred on him the Order of Distinction "in recognition of ". . . service to the Jamaican community in Canada". Among other awards were a plaque from the Afro-Caribbean Association of Manitoba (1993), a plaque from the Jamaican Association of Manitoba (1999), and a Hall of Fame award from the Black Educators' Association of Manitoba (2005). He was a much sought-after public speaker, and all those who knew him will miss his sense of humour. In his community, DK had been a soccer coach of a championship team, and enjoyed the friendship of his neighbours over very many years. He had great fun playing with his tennis pals in Winnipeg, and his table tennis pals in Langley. With the encouragement of family and friends, he faced up to his physical difficulties such as living with a tracheostomy and PEG tube, with equanimity. He was highly appreciative of the skilled medical attention that he received from Dr. Mark Barker, Dr. Les Garber, Dr. David Manusow, Dr. Jonathon Werier, Dr. Donald Duerksen, Dr. May Chin Dr. Russ Stogryn, Dr. Murray McFadden, Dr. Michael Dobrowski, Dr. Jennifer Rahman, Dr. Don Shirley, the courtesy of their staffs, and the assistance from the staff of the Manitoba Home Nutrition programme and Langley Memorial Hospital. DK treasured his wife Lucinda, and their children Lisa and Kevin. He also cherished the friendship of his many friends in Winnipeg, Langley, other parts of Canada, Jamaica, the U.S. (especially Tampa), England, Africa, and other areas of the world. A service of remembrance will be held on Thursday, May 28 at 2:00 p.m. at Neil Bardal Funeral Centre, 3030 Notre Dame Avenue, across from Brookside Cemetery, with Father Henry Falconer, and Rev. John Wortley, officiating. Donations in DK's memory may be made to a charity of your choice. In accordance with his wishes, DK will be cremated. NEIL BARDAL FUNERAL CENTRE 204-949-2200
Publish Date: May 25, 2015

DONALD K. GORDON Peacefully on Wednesday, May 20, 2015, with family by his side, Donald passed away at the Victoria Hospital at the age of 79 years. A memorial service will be held at 2:00 p.m., Thursday, May 28 at Neil Bardal Funeral Centre, 3030 Notre Dame Avenue, across from Brookside Cemetery. Longer obituary to follow. NEIL BARDAL FUNERAL CENTRE 204-949-2200 neilbardalinc.com
Publish Date: May 22, 2015