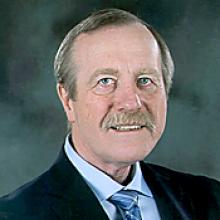 LARRY MATTHEW ZIFFLE With deep sadness we announce that Larry, beloved husband of Augustine passed away peacefully on Saturday, May 23, 2015 at home with his family at his side at the age of 61 years. Funeral service will be held on Wednesday, May 27, 2015 at 11:00 a.m. (today) at St. Anthony of Padua Church, 250 Burrin Avenue, Winnipeg. www.seasonsfunerals.ca
Publish Date: May 27, 2015

LARRY MATTHEW ZIFFLE September 22, 1953 - May 23, 2015 With deep sadness, we announce that Larry passed away peacefully on Saturday at home with his family at his side, at the age of 61, after a six year battle with cancer. Larry was predeceased by his father Alfred. He is survived by his loving wife Augustine; daughter Lauren; stepsons, Corey and Andrew Bainard; his mother Olga; brothers, Robert and Allan; sisters, Linda (Darryle) Desbiens (Laura, Chris), Marlene (Mark) Drawbridge (Megan, Mathew and Brittany) and many nieces, nephews and friends. He was born and raised in the North End of Winnipeg and worked at MTS for 40 years until his retirement in June of 2014. Larry had a lifetime love of lacrosse and bowling. Included in his many interests were model trains, photography, painting and guitar. His active involvement with his beloved pastimes allowed him to create wonderful lasting friendships throughout his life that he cherished deeply. Funeral service will be held on Wednesday, May 27, 2015 at 11:00 a.m. at St. Anthony of Padua Church, 250 Burrin Avenue, Winnipeg with Father Dominic Yuen presiding. Interment to follow at Glen Eden Memorial Gardens. In lieu of flowers, donations may be made to CancerCare Manitoba. www.seasonsfunerals.ca
Publish Date: May 26, 2015