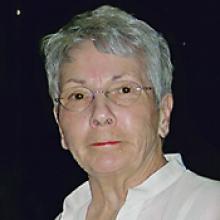 ANNIE BELLE MCCULLOCH With her family by her side, Annie Belle McCulloch passed away peacefully at Valleyview Care Centre on Sunday, May 17, 2015. Born July 7, 1934 in Kinosota, Manitoba to John and Bessie Moar, Annie's father died when she was two years old and her mother then married Joe Bates. She was the oldest of six children and left home at age 16 years to work in Portage la Prairie and then Winnipeg. In 1952, she met Don McCulloch and they were married in January 1955. Don was in the army so they started to travel the world with various postings including New Brunswick, Germany - on three separate occasions, Winnipeg, Shilo and Gagetown. Their final posting was again in Shilo, where they settled and built a home in Cottonwoods. Mom started working at Crang's Store before moving to Canex Department Store. When Don passed away in 1994, Annie retired and began volunteering at the library and various community functions. She was predeceased by her husband Don, mother Bessie, father John, stepfather Joe, brothers Sam, and Barry. Left to mourn are her son Ron (Margaret); daughter Dawn (Peter); grandchildren Angus (Laura), Raymond (Jenn), Kim, Shane (Whitley), Marshall (Heather), Brittany (Byron), Mike (Phia), Missy (Dan); brothers Gordon (Mary), Garnet (Phylis) and sister Agnes (Doug). She also leaves 13 great-grandchildren and numerous nieces, nephews and cousins. The Ceremony to Celebrate Annie's Life will take place on Friday, June 5, 2015 at 2:00 p.m. at St. Barbara's Chapel, Shilo with Padre Stephen Neil officiating. Interment will be held on Saturday, June 6, 2015 at 2:00 p.m. at the St. Bede's Anglican Cemetery, Kinosota, Manitoba. If friends so desire, donations in memory of Annie may be made to the Alzheimer's Society, Unit 4B-457 9th Street, Brandon, MB R7A 1K2. Expressions of sympathy may be made at www.memorieschapel.com. Arrangements with Memories Chapel, Brandon, 1-855-727-0330.