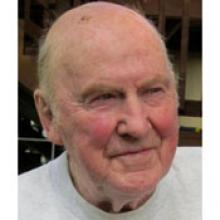 GEORGE HENDERSON PHILLIPS November 8, 1928 - May 29, 2015 George was born in Roblin, Manitoba to Reverend George Edward and Rose. The family lived in various parishes throughout Manitoba before residing on Ashburn Street in Winnipeg's West End As a youth, George enjoyed his summer jobs at Banff Springs Hotel in the Alberta Rockies as well as working for the CP Railway dining cars, meeting people like actor Randolph Scott and writer Ernest Hemingway. He learned to speak German while escorting young German Prisoners of War to their various detention camps during the Second World War. George attended St. John's College (Ravenscourt) and then the University of Manitoba where he earned a degree in Pedagogy specializing in Physical Education. He was a physical education instructor at various schools starting with Margaret Scott, General Wolfe and Churchill High School coaching numerous championship teams in various sports. He often said "Teaching Physical Education opened many doors. You not only met most of the students at your own school but phys-ed teachers and students from around the province." He then moved on to become the Assistant Director of physical education for Winnipeg School Division and followed that as principal at Hugh John Macdonald and then Kelvin High School from 1976 to 1989. George was a leader in the development of amateur sports in the province of Manitoba. Amongst his many sports contributions, Phillips was the founding father of the internationally acclaimed Legion Athletic Camp at the International Peace Garden in 1962 and was associated with the camp as director and head coach for 50 years. "If the truth be known, he is probably one of the most important individuals in the amateur sport scene in Manitoba's sport history," said Manitoba Sports Hall of Fame inductee Maureen Dowds, track and field (inducted 1988). "He has dedicated a large part of his life to making life better for the youth of Manitoba and surrounding areas. Many of those individuals will and have gone on to continue this legacy, because of the opportunity that he has given them," added Garth Pischke, volleyball (inducted 1989). Manitoba Amateur Athlete of the Century. George was an individual that thought outside the box. During the 1950s and early 1960s he organized mobile track and field clinics during the summer months, which traveled throughout the province of Manitoba and Northwestern Ontario. He was also one of the key organizers and meet director for the highly successful Red River Relays indoor track meet, held annually at the Winnipeg Arena. In the early 1960s he was on the cutting edge of developing co-ed sports while also delving into sports medicine. Never discriminating, he facilitated that females obtain head coaching duties. In the 1970s he received a plaque for his involvement in amateur sport from the Governor General of Canada. He was recipient of the inaugural Manitoba High Schools Athletic Association Certificate of Recognition in 1980. In 2010 was inducted into the Manitoba Sports Hall of Fame (Builder) and St. John's Ravenscourt Sports Hall of Fame (Athletics). Along with his wife Sandy, of 30 years, he enjoyed traveling across the Western hemisphere visiting various countries and casinos while also finding time for TCM Classic cruises in later life. He was a man of varied interest: gardening, wood working, painting, philately, world history, reading and meaningful conversation with whomever encountered...dogs and cats included. Phillips was a long time resident of the Grosse Isle, MB area. He says goodbye to his wife Sandy, his children Jeffrey Phillips of Winnipeg, Kathleen and Ron Adams of Grand Forks, ND, and Curtis J. Phillips and Diane of Fort McMurray, AB, and Sandy's children Alan Grimsley and Vvidya along with Steven Grimsley and Deborah of Winnipeg. He will remain an inspiration to his 15 grandchildren and 15 great-grandchildren. He also leaves a sister Barbara Reed and (Bob) of Swan River, MB and bother John Phillips, and beloved canine Otis of Surrey, BC. His favourite quote was: See the happy moron, He doesn't give a damn, I wish I were a moron, My God! perhaps I am! He was a true Renaissance Man. George chose to forgo a conventional funeral and our family thanks you for your positive interactions with George during his lifetime. In lieu of flowers, friends may donate to a charity of their choice. NEIL BARDAL FUNERAL CENTRE 204-949-2200 neilbardalinc.com