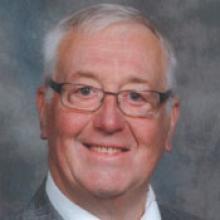 PAUL INGE SORLIE August 7, 1946 - June 3, 2015 Our collective hearts are broken as we announce the passing of Dr. Paul Inge Sorlie in Selkirk, Manitoba at the age of 68 years. He is survived by his wife, Carol Girling, daughters Annie Sorlie (Trevor Didychuk), Inger Kobro (Atle) and Marie Sorlie (Ryan Clyde), sons David Little (Nicola), Paul Little (Dianne), and daughter Mary Beaudry (Hector), our precious grandchildren, Anders, Joshua, Jonah, Haily, Adam, Erika and Regen, his sister Mette Stier (Knut Marud), his nephews, and his in-laws. He was predeceased by his parents. Born on August 7, 1946 in Tonsberg, Norway to Solvig Steir and Gunnar Sorlie he grew up Norway, coming to Canada in the fall of 1969 to attend Canadian Memorial Chiropractic College. After graduation in 1973 he practiced his beloved and honourable profession in Dauphin for 32 years. He fiercely defended his profession every chance he got and joyously celebrated his milestone anniversaries with colleagues. He led a rich and full life playing basketball, being a Big Brother, socializing, fishing, boisterously supporting the Dauphin Kings, attending Trinity Lutheran Church and more fishing. He and Carol loved travel and explored many locations in Canada, the US and, of course, Norway. After moving to The Pas in 2006 he found a new interest in teaching literacy at the Friendship Centre. His students, as he called them, made as much difference to him as he did to them. He was a big man with an even bigger presence. Loud, opinionated, intelligent, funny, caring, much-loved and respected, he leaves each of us with precious memories and funny sayings that only he could have made. A funeral service was held Thursday, June 11, 2015 from the Trinity Lutheran Church in Dauphin, Manitoba. Officiating the service was Reverend Howard Burnie. In lieu of flowers, donations can be made to the Heart and Stroke Foundation, 6 Donald Street, Winnipeg, Manitoba, R3L 0K6. Rest peacefully, our love, my love. Sneath-Strilchuk Funeral Services (204) 638-4110 www.sneathstrilchuk.com