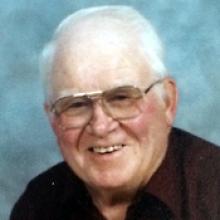 DOUGLAS LESLIE THOMPSON November 7, 1931 - June 21, 2015 On a beautiful, warm, sunny start to Father's Day, Doug was called home by his Father in Heaven. He passed away at the Life Care Medical Center in Roseau, MN on Sunday, June 21, 2015. Douglas was born November 7, 1931, the eldest, to Martin and Mildred Thompson of Piney. He went to school and lived his entire life in Piney. On June 14, 1952 he married Margaret Brugos, they settled in Piney and raised four children. Doug's working days were in Thompson's Garage where he took ownership in 1969, selling many Ford F150 trucks and later acquired his Autopac license. In 1970 he took up flying, taking lessons at Harv's Air Service in Steinbach and even bought himself a small plane. He later sold the plane and bought tracts of land because a family member was opposed to him being up in the air. He divided his time between the garage and farming and loved to look at his grain fields glistening in the sun. He retired from the garage and farming in 2001 at which time he also sold his land. He was instrumental in starting the Piney Fire Department and was Chief for many years. He loved watching sports on TV, reading, sitting outdoors and driving around the woods. In his younger years he played baseball, hockey and curling. His children and grandchildren were his inspiration, he was so very proud of their accomplishments. In spite of health issues he continued to have an upbeat attitude. He was a wonderful husband, father, grandpa and friend. Predeceased were his parents Martin and Mildred, his parents-in-law John and Elizabeth Brugos, his brother-in-law John Brugos, and his beloved daughter Janet. Douglas was such an important presence in our family and will be so greatly missed. Our love for you will be forever. Left to cherish his memory are his wife Margaret, children Shelley (Mark) Hebel, Curtis (Betty), Paul (Jo-Anne) and Brian Smook. His siblings are brothers Wayne (Hannah) and Don (Audrey), and sisters Nola (Pete) Camplin and Karen (Darrel) Caulley. Grandchildren are Scott (Allison) and Troy (Ashley) Smook, Paula and Eric Hebel, Taniele and Carly (Ryan) Thompson, and Lauren and Ryan Thompson. His sisters-in-law are Helen (Nelson) Herr of Ohio and Alice Brugos of Florida, also many nieces and nephews. The funeral service for Douglas will be held Monday, June 29, 2015 at 11:00 a.m. at the Vassar Catholic Church in Vassar, MB. In lieu of flowers, donations may be made to the Wampum Cemetery Fund, c/o Sharon Friesen, Sprague, MB R0A 1Z0. Arrangements by Vita Funeral Home 256 Railway Avenue, Vita, Manitoba (204) 425-3114