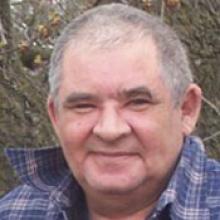 EDWARD BORIS KUSHNIRYK 1948 - 2015 It is with great sorrow we announce the sudden passing of Edward Boris Kushniryk on Wednesday June 24, 2015. Edward is survived by his wife of 46 years, Yvonne, son Keith, sister Elsie, sister Eva, brother-in-law Bill, sister-in-law Joan and numerous nieces and nephews. He was predeceased by his son Donald, parents Bill and Mary, father and mother-in-law Noel and Irene, sister Sophie, brother-in-law Matt, brother John, sister-in-law Eleanor, brother-in-law Pete, brother-in-law Norman, niece Christine and nephew Robert. Edward was born in Vita, MB on January 1, 1948 and grew up on the family farm in Arbakka, MB. He was the youngest of five children. He attended school at Mazeppa in Arbakka and at Shevchenko in Vita. Edward met his true life partner, Yvonne in 1966 and they married on July 13, 1968. In 1972 he moved his family to the family farm in Arbakka and lived the next 41 years there. Besides farming Edward worked out at Maple Leaf Construction, Vita Creamery and has a custodian at Shevchenko School. Edward battled kidney problems from early in life. In 1994 he had to give up farming and his custodial work as they became too much for him. Despite his illness, Edward still tried to live an active life doing less strenuous work like gardening, building mechanical projects, woodworking, his family genealogy, living by the motto "What didn't get done today would get done tomorrow, next week..." In 2013 Edward and Yvonne moved to Vita where he continued his gardening, yardwork, working in the garage until his passing. Funeral service will be held on Monday, June 29, 2015 at 2:30 p.m. at the Vita Funeral Home, Vita MB, with viewing from 1:30 p.m. - 2:30 p.m. In lieu of flowers donations may be made to St. Peter and Paul Ukrainian Catholic Cemetery, Box 46, Vita, MB, R0A 2K0 Vita Funeral Home 256 Railway Avenue Vita, Manitoba In Care of Arrangements (204) 425 3114