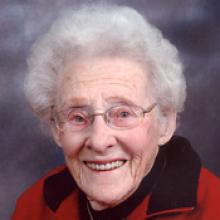 BERTHA MARGERY DENBOW 1915 - 2015 On Monday, June 22, 2015, Bertha Margery (Duncan) Denbow passed away peacefully in her sleep at the Souris Personal Care Home, having lived a full and happy life for just short of a century. A pioneer of the Deleau/Bethel Church district she was born on July 30, 1915 on the Duncan family homestead. She was the fourth born of a family of ten. She was predeceased by her husband Reuben in 1967, daughter Dawn Howard in 2002, parents Andrew and Lillian Duncan, brothers Cecil, Melvin, Norris and Allan, sisters Winnifred MacDonald, Ruby Doyle, Alma McCarvill and Ivy Morris. She will be sadly missed and lovingly remembered by her daughter Gail Watson (Lyle), granddaughters Lori Watson; Jody Watson (Jonathan) and great-grandson Austin; by son-in-law Charles Howard (JoAnne), grandchildren Courtney Howard Scott (Darcy), great-granddaughters Elody and Viviana; Trevor Howard (Mari), great-granddaughter Charlie; granddaughter Kelsey; sister Joan Phillips and many nieces, nephews and their families. Bertha completed grade 11 at Deleau Consolidated School and enjoyed playing tennis and basketball. She wanted to become a nurse but the financial means were not available to her. At the age of 19 she went to work at the Denbow family farm, one mile away from her own home to manage the household responsibilities. On March 19, 1936 she married the love of her life Reuben Denbow, and the Denbow farm became her home for the next 79 years. Reuben and Bertha took over responsibilities for the farm and together they milked cows, raised purebred Aberdeen Angus cattle, chickens, turkeys and grew cereal crops. Until the early 1950s Bertha ran a household and worked as an equal partner outside on the farm without the benefits of electricity or running water. She had a wood stove, an ice-house and an outdoor toilet. In addition to helping with the cattle and poultry, she planted, cared for and harvested two large gardens to supply the food needs of the family and hired help. During threshing times she would feed between 15 to 20 people meals and lunches each day. Gardening was a pleasure and even in her later years she planted more than enough to share with her family, neighbours and Souris friends. Having plenty of flowers was valued and she took considerable pleasure in a good looking yard. When the Deleau Curling rink opened she became an avid curler and enjoyed competing in local bonspiels. Later she curled with the Souris Ladies until her 92nd year sometimes representing the club and region in competitions. Reuben and Bertha loved to dance and were known for winning all the Old Time Waltz competitions at the community dances through-out the area, plus were often part of the best square dance set as well. After Reuben's passing she took up golf and could be seen weekly on the Souris golf course with the Tuesday ladies league, playing into her 94th year. Bertha was an active volunteer in the community and held leadership and executive roles. She belonged to the Bethel United Church Women, delivered Meals on Wheels and was a life member of both the Souris Legion Auxiliary and the Crescent Rebekah Lodge. She travelled with Reuben to Flin Flon to fish and to Yellowknife to visit with Dawn. Later Vancouver, Hawaii, Barbados and Palm Springs were also experienced. Bertha enjoyed a fun time, loved to laugh, was independent, determined, youthful in spirit, resourceful, practical, a hard worker, and an advisor to her family and friends. Bertha was a living Sifton municipality encyclopedia with knowledge of names and dates going back beyond her 99 years and was called upon often to share her wisdom. Her family and neighbours were important to her and she often showed up at their door with a pan of biscuits, home-made buns or a pie when she knew it was busy on their farm. We are grateful to her neighbours who supported her being able to remain on the farm. She lived by herself for forty eight years, but was never really alone. Special thanks to Dr. Stone and the members of the Souris Medical Associates, the staff of both the Souris Hospital and the Personal Care Home for their excellent care. Funeral services were held in St Paul's United Church on Friday, June 26, 2015 and interment in the Souris & Glenwood Cemetery. In lieu of flowers, donations in memory of Bertha may be made to the Souris Personal Care Home c/o Prairie Mountain Health, Box 10, Souris, MB R0K 2C0, or to a charity of your choice. Kowalchuk's Funeral Home, Souris in charge of arrangements. Expression of sympathy may be made at http://www.kowalchuks.net/