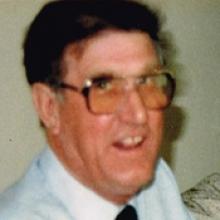 NORMAN WILSON Peacefully on July 1, 2015 at the age of 94, Norman passed away with his wife by his side, at the Rock Lake Personal Care Home in Pilot Mound, Manitoba. He is survived by his beloved wife of 64 years, Alice Wilson, dear son Lindsey Wilson (Kathryn), treasured grandaughters Kelsey McCuspey (Kirk), Hillary Anderson (Rory) and great-grandson Colton McCuspey. Born in Crystal City, Manitoba, Norman was the sixth and youngest child of Frederick and Annie Wilson. He was predeceased by his parents, his brothers Dick, Percy, and Stan, as well as his sisters Pat and Olive. He lived and worked in Crystal City his entire life and took great pride in his career working for the municipality, his beautiful garden, and most of all his greatest treasure, his family. He was a tremendously talented woodworker, gardener, painter and had the talent to repair or build absolutely anything. Norman lived his life with dignity and grace. His passing has left an enormous void in the hearts of his family and he shall be greatly missed. Sincere and heartfelt thanks to the staff of the Rock Lake Personal Care Home for the kindness and dignity with which they cared for Norman. Memorial Service will be held at the Crystal City United Church on Monday, July 6, 2015 at 2:00 p.m. Flowers gratefully declined. Donations to Parkinson Society of Manitoba, 414 Westmount Dr., Wpg, MB R2J 1P2, would be appreciated. Messages of condolence may be made online at www.wheatlandfs.com. Wheatland Funeral Service (204) 825-2848 www.wheatlandfs.com