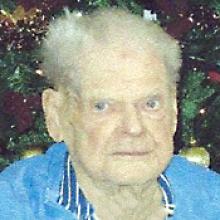 BERNARD MAURICE COX August 12, 1920 - July 6, 2015 It is with heavy hearts we announce the peaceful passing of Bernard, July 6, 2015 at Luther Home. Bernard is survived by his loving wife of 67 years Elsie, his daughter Judi (Clair), sons Douglas (Linda), Gordon (Darla), plus grandchildren and great-grandchildren. Bernard was predeceased by his father William and mother Elizabeth, siblings Art, Howard, Irene, Marg (Walter) and nephew Bernie. Bernard was a Second World War veteran. He landed on the beaches of Normandy and at the end of the war he came home and married Elsie. Bernard was employed with the Winnipeg Fire Department until he retired in 1984. Dad loved to work on his hobby- H.O. trainset. Dad and mom went out dancing every Saturday night, until they could no longer do so, and the family enjoyed many Christmas eves together. We would like to thank the staff at Luther Home for their care and compassion during the past 17 months. As per Bernard's request there will be no formal funeral. Donations can be made to Luther Home. Dad may you rest in peace.