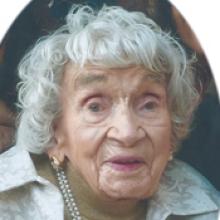 LILIAN ELEANOR GREELEY Lilian Eleanor Greeley was born in Russell, Manitoba on June 15, 1919. She was the second eldest of four children born to Charles and Anne Greeley, of British and Scottish descent, respectively. She was predeceased by her siblings: Hazel Allen (married to Elbern and mother of Linda Gyorfy, Robert Allen and Charles Allen, grandmother to Christine, Elizabeth, Samantha, Maggie and Andy); Kathleen Yanda (married to Ted and mother to David Yanda) and Robert Greeley (married to Minerva Assaly, father to Beverley Greeley Johnson and Kimberley Greeley and grandfather to Matthew and Alexander Johnson.) She herself did not marry though an attractive, elegant lady - she chose education and travel instead. She was trained as a teacher, attained her Masters Degree in Greeley, Colorado, and, for many years, taught English both here and abroad, including Panama, Costa Rica, New Zealand, and Ponoka, Alberta. During the course of her travels she collected many beautiful artifacts. She retired to Birtle in the 1970s where she lived and cared for her widowed mother up until her passing. In 1986 her brother Robert was diagnosed with terminal cancer. Upon receiving this news she dropped everything and devoted the subsequent four months of her life to his care and comfort until his passing. Beverley and Kimberley will be forever grateful to her for this extremely kind and generous gesture. She was a committed letter writer and has kept in touch with family and friends this way. Eleanor remained in frequent touch and close to her two sisters all of their lives. She had a light hearted personality and a delightfully distinctive and cute laugh. She was a talented artist and was a great fan of curling. She played that sport in her younger years and was on a rink that scored an "eight ender". In addition she enjoyed viewing and knowing about all types of art, playing cards and various games. She tried to always keep up with all current events. She loved to travel and travelled regularly up until just a few years ago. In 1999 she visited family in Montreal to see in the Millennium year and the following fall she travelled with family to Disney World, Florida. She was wonderful company. She was very family oriented. Several years ago a party was held to celebrate her 90th birthday, and her quiet wish upon blowing out her candles, was that her nieces and nephews stay in touch. They made every effort to honour that wish. The Graveside Service was held Saturday, July 11, 2015 at the Birtle Cemetery with Elaine Dixon officiating. A reception followed at the Birtle United Church Fellowship Hall. If friends so desire donations may be made to the Birtle and District Foundation or the Birtle Sunnyside Manor Personal Care Home. Braendle-Bruce Funeral Service of Russell, Manitoba in care of arrangements.