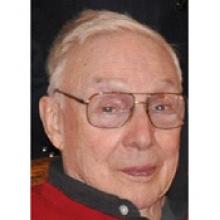 PAUL SULLIVAN LINDSAY December 16, 1930 - July 11, 2015 Paul, devoted husband of 61 years to Shirley (d. October 13, 2013) and loving son of Jack and Dorothy Lindsay, passed away peacefully on July 11, 2015 with his children at his side. He will be lovingly remembered by Patricia Adams (Darrell) and their children Jared (Jackie) and Kevin (Carley); Bruce (Patrice) and their children Matthew and Alaina, and John (Donna) and his children, with Tracey, Sullivan and Rosemarie. Paul will be sadly missed by his brother Rod (Joyce), Shirley's brothers and sisters, and many nieces, nephews and cousins. Paul began his career and his love of trains at the CP yards. He raised his family in Fort Garry while working at the University of Manitoba, where he helped found the Association of Employees Supporting Educational Services (AESES) and served as their first president. He was always engaged in his community. Paul was the Akela of Cub and Scout troops for years in Fort Garry. He was especially active with curling at the Pembina Club and a dedicated blood donor. Paul and Shirley enjoyed many years together at the ReFit Centre and thank everyone there for their support. Paul's family also thanks the staff of the Health Sciences Centre's SICU and GA3-Step-Down Unit for their professional care of Paul and compassionate support during his last days. Paul and Shirley also benefited from decades of care from Dr. Hayward. A Celebration of Life for Paul will be held at 1:00 p.m. on Friday, August 21, 2015 at St. Paul Anglican Church, 830 North Drive, Winnipeg followed by a reception. In lieu of flowers, gifts made in Paul's memory may be directed to: St. Paul's High School, 220 Grant Ave., Winnipeg, MB R3P 0P8, and the Paul Lindsay Memorial Fund at the University of Manitoba - Donor Relations, 200 - 137 Innovation Drive, Winnipeg, MB R3T 6B6, or on-line at umanitoba.ca/giving