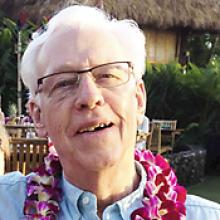 JAMES COLIN GILROY Born January 20, 1934, Jim Gilroy passed away peacefully at home on August 4, 2015 after bravely dealing with cancer and other health issues over the past year. Married to his wife Marybet for 55 years, he is also survived by his daughter Maryth and son-in-law Jason Broadfoot, his son Colin, daughter-in-law Barb, grandchildren Morgan and Ilona, and his brother-in-law Kent Morgan and partner Gill Giles. Born in Winnipeg the only child of Beulah and Colin Gilroy, Jim's love of music was apparent from a young age growing up in Point Douglas. Jim would often break into song at the drop of a hat. He also played harmonica and whenever he was around cutlery he would grab the spoons and play them on his knee. No one knows for sure but this fixation on tableware may have been what lead to his more than 30 year career as a restaurant supply sales representative for Russell Food Equipment. Over the years Jim was a drummer and vocalist in several bands around Winnipeg including The Polka Dots and The Banana Bunch, music with "a peel". For over 30 years Jim was an active member of the Winnipeg Golden Chordsmen Barbershop Chorus. Up until very recently he very much enjoyed singing lead with his good buddies in the quartet TEMPO. The family lived in Westwood for 43 years. One of his favourite places was the family cottage at Matlock where he enjoyed reading and walking the various family dogs. He was a jack of all trades and liked to spend his time renovating and fixing what was broken. Jim loved theatre and never missed a Fringe Festival. He had the chance to travel and take family trips to Hungary, Hawaii, Las Vegas, and New York. His most important role of all was as Dadpa to his grandchildren Morgan and Ilona who meant the world to him and always put a smile on his face. It was Jim's wish that donations be made for pediatric cancer research and directed to "CancerCare Manitoba Inside Ride Donations" 204-784-2777 http://Winnipeg.theinsideride.com. Jim loved a good party and would like to invite his friends to join his family at a celebration to be held in his honour this autumn. An announcement will be published at a later date. "You and the song are gone but the melody lingers on." - Irving Berlin NEIL BARDAL FUNERAL CENTRE 204-949-2200 neilbardalinc.com